Guyana pushes ahead with single clearance system for exports, imports 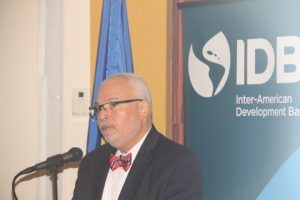 Guyana is considering the Trinidad and Tobago model of the Electronic Single Window (ESW) to fast-track the processing of imports and exports instead of waiting days, under a project being facilitated by the Inter-American Development Bank (IDB).

With financing from South Korea, the hemispheric bank on Wednesday brought together stakeholders from the Ministry of Foreign Affairs, Guyana Police Force, Guyana Revenue Authority, Guyana Office for Investment (GO-Invest), Ministry of Business, Ministry of Finance and the private sector to examine the model.

Finance Minister, Winston Jordan, however, raised concerns about portraying Guyana as having a “bad ranking” (142) on the World Bank ‘s Ease of Doing Business ranking compared to Trinidad and Tobago at 126. “My point is the flaw in some of the arguments- both in the indices that are put together,” he told reporters.

He noted that the Caribbean, as a group, does not openly object to the way the rankings are arrived at, but individual countries do so whenever it is not in their interest. 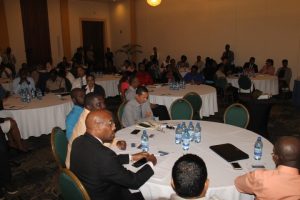 Participants at the Single Window workshop organised by the Ministry of Business in collaboration with the Inter-American Development Bank.

Jordan said sometimes a lot of survey forms are circulated but only a handful are returned and used as the basis for arriving at the index. “But still, international agencies use these indices as their guideposts to determine what is going on in your country and because it’s labelled World Bank…other people who don’t know your country will go to these things to see…and take their business somewhere else,” he said.

Guyana, he said, could not dismiss the rankings but should “complain and work to improve the methodology” while at the same time “look, dissect the indices and see where we can improve”.

IDB Lead Specialist on Integration and Trade, Mario Umana remarked that although there are several Single Window system in the Caribbean, “the one that has the lead and the most experience is the one in Trinidad.”

Despite his objections about the way the World Bank arrives at the rankings, he acknowledged that the Single Window  system “can do a lot for trade facilitation”.

Minister of Business, Dominic Gaskin urged participants not to be skeptical about the Single Window system but to work hard to ensure that the project is ongoing. “We need to own this and we need to believe in this and if we don’t there will be no Single Window system in Guyana any time soon,” he said. “All the oil in the world will not save us if we are operating with an antiquated system,” he said.

Guyana began preparing to introduce the Single Window System eight years ago with assistance from Crown Agents. Back then, doing business at the Guyana Geology and Mines Commission (GGMC) to obtain licences or permits had showed that 46 business processes were required, accounting for 133 days of processing and 463 steps amounting to an average of three days and 10 steps.

Crown Agents had recommended that a draft Single Window Bill be passed, E-government/E-commerce systems for contracting and payments, specific rules for data-sharing between government and the private sector, database ownership and a fully automated system.