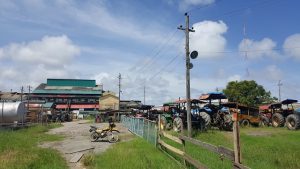 Finance Minister Winston Jordan on Wednesday said the Guyana government is about to borrow GY$10-15 billion to fund the operations of the Skeldon and Enmore sugar estates, even as he defended the decision to separate the estates’ operations from the Guyana Sugar Corporation (Guysuco).

The loans are expected to be acquired before mid-March, he said, adding that government hopes that revenues generated from the sale of estates and other properties would be used to repay the loan that is expected to be borrowed from a consortium of local commercial banks.

Government plans to keep the Skeldon and Rose Hall Estates open as it searches for buyers and close deals in another six to nine months. “If it is closed and moth-balled and buyers come, they probably are not going to be impressed as if they were working and seeing the estates are valuable properties to be acquired,” he said. The United Kingdom-headquartered PriceWaterhouse Coopers is conducting a valuation exercise of  Guysuco’s estates to help prepare prospectuses for buyers.

The National Industrial Commercial and Investments Limited (NICIL)- government’s holding company for state assets-, he said, intends to repay the loans over the next three to five years.

“These estates potentially are not going to be producing sugar per se or the kind of volumes that you know. It’s going to do some molasses. There is an interesting model for Enmore prior to its complete diversification and that will be involving hopefully DDL (Demerara Distillers Limited)”, Jordan said, adding that government does not want that rum company import molasses.

Defence of closure under Guysuco

The Finance Minister defended the decision to close the estates, lay off workers and place the estates in the hands of NICIL’s Special Purpose Unit. He argued that it would have been more expensive to keep them opening especially in the areas of staffing and costs.

“This is a miniature operation relative to what you had at Guysuco before,” he said, adding that this model sends the right signals to investors unlike keeping them under the cost-deficient state-owned sugar corporation. “Here, you pull them away from Guysuco, you try to make them efficient and so on. The balance sheet looks better and the attraction to the investor is different plus these are now separate entities as opposed to be one global family under the Guysuco arrangement,” said Jordan, a career economist.

Saying that the Treasury could no longer afford to bail out the cash-strapped and low-producing Guysuco at an average of GY$1 billion per month, government since coming to power in May 2015 has sent home more than 4,000 field, factory and management workers of Guysuco as closed down the Skeldon, Rose Hall-Canje, Enmore and Wales Estates.

The Guyana Agricultural and General Workers Union and the opposition People’s Progressive Party Civic have since welcomed government’s decision to re-open the Skeldon and Enmore estates and re-employ some of the laid off sugar industry workers.