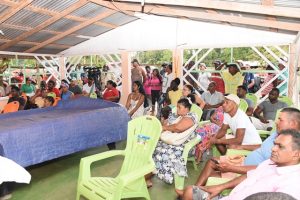 Temporary amnesty to illegal foreign miners has been granted so that they can regularise their immigration status in Guyana, says the Ministry of Citizenship.

“We are giving you a chance to come to the office in Georgetown with your passport and apply for your extension of stay. If you came to work and your initial visa was an employment visa you can have that extended as well as your work permit,” Minister of Citizenship, Winston Felix was quoted by government’s Department of Public Information as telling foreigners working in the Mazaruni, Mining District Three on Monday, February 19.

Minister Felix was part of a team led by Minister within the Ministry of Natural Resources, Simona Broomes to Puruni Landing. The team met with miners and business operators to discuss regularising operations in the area.
Foreign nationals, particularly Brazilians, had raised the concern of legalising their status with Minister Broomes on her previous visits to the Landing. While they do not require a visa for entry into Guyana, they do need a landing permit and work permit.

These permits are granted by the Ministry of Citizenship. A work permit is valid for three years, however, the Guyana Geology and Mines Commission (GGMC) has to submit applications to the ministry for processing. It takes about three to four business days for the ministry to process the landing permit which begins upon legal entry to Guyana.
Other foreign nationals who require a visa to enter Guyana legally have to apply for an employment visa on arrival and a work permit subsequently. All these transactions have to be done at the ministry’s office located at 146 Waterloo, Georgetown.

The foreign nationals were also warned, by the minister, that this application process has to be done in person. “Don’t allow anybody to take money from you to do it they can’t do it for you; you have to come and apply for your own registration, your visa; you have to come to do that anybody who taking money from you bad business,” Minister Felix cautioned.

Foreign nationals who overstay their time in Guyana are classified under prohibited immigrants’ status Minister Felix explained. This basically means they are illegal and could be brought before the courts and deported.
“Like I said, we are not here to round up anybody and to get them out of the country, no, we are not doing that. We want to let you know what you need to do,” Minister Felix assured the miners.