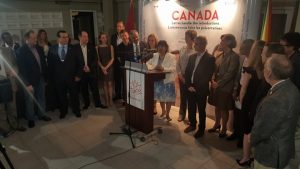 Canada’s High Commissioner to Guyana, Lilian Chaterjee and representatives of Canadian companies that participated in a major oil and gas trade exposition and conference (GIPEX 2018) in Guyana.

Locally-owned and controlled businesses need to find new ways of operating in order to be prepared to grasp opportunities in the burgeoning oil sector, top officials of Canada and Guyana said as the inaugural Guyana International Petroleum Business Summit & Exhibition (GIPEX 2018) came to a close.

Canada’s High Commissioner to Guyana, Lilian Chaterjee and the Chief Executive Officer of the Guyana government’s Office for Investment (GO-Invest), Owen Verwey made the strong recommendations at separate events held within 24 hours.

Addressing a reception at her residence for the several Canadian companies that participated in GIPEX, the Canadian envoy said Guyanese businesses need to restructure the ways they operate so that they could partner with foreign companies.

For his part, Verwey pointed to a number of loopholes- including structure, ownership, standards and transparency- that Guyanese businesses need to close to make them ready for foreign companies. “We don’t have that sufficient of a corporate culture. We have that culture where it’s a one-man show, a one-man operation. Standardisation is still to raise its level; not that we don’t have that in Guyana but the actual practice of it in all aspects of business is very, very important,” he said when asked by Demerara Waves Online News at a GIPEX closing press briefing. He added that record-keeping and trace-ability were recurring points at the conference. 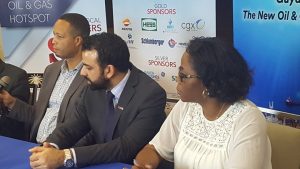 In the area of advanced technology, the CEO of Go-Invest urged businesses to keep abreast of the latest  while networking with overseas businesses  and merging among themselves locally. “Probably two or three small mechanic shops or welding shops may have to start considering things like that could help to up the scale of their operations, bring efficiencies to them and manage their costs of training and their costs of operations; things like that, I think, will be required,” he said.

Addressing representatives of Canadian oil and gas-related companies here for the January 7 to 9, 2018 GIPEX, the Canadian High Commissioner called on local businesses to do several things to prepare themselves for the next phase of Guyana’s “explosive economic development,we hope” for current and future demands. “Local businesses need to step up and develop new capabilities which include investing in product development as well as investing in manpower development or people-power development to ensure that workers are equipped with the right skills to guarantee competitiveness of local businesses,” said Chaterjee.

The Canadian envoy noted that her country’s investors are not only experienced in oil and gas but also in mining and clean energy. She said the Canadian High Commission would continue its decades-long mission of promoting economic, business and technical cooperation and partnerships.