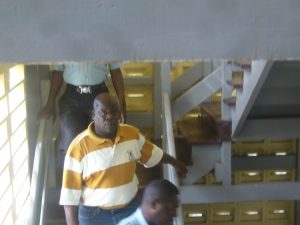 A 46-year old pastor has been sentenced to 40 years imprisonment for having sex with a girl under the age of 16 years, who he had been counseling.

Hannibal, said to be a pastor for almost 30 years some of which he spent at the Rosignol Deliverance Temple at Mercy Dam, Rosignol, did not respond to any of the statements when he was asked whether he had anything to say.

The court found him guilty of committing the offence between Friday January 29, 2016 and Saturday, January 30, 2016 at Rosignol.

The pastor’s offence came to light when the child did not return home one evening and she later confessed to her mother what had happened.

Hannibal was arrested, charged and faced a preliminary inquiry at the Blairmont Court where the magistrate found that there had been sufficient evidence for the man to face trial by a judge and jury.