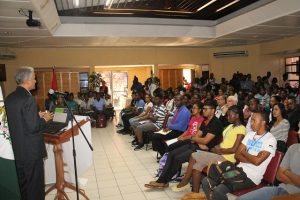 Dr. Mangal addressing a discussion  on the Government of Guyana’s Vision for the Oil and Gas Sector held at the University of Guyana’s Education Lecture Theatre, Turkeyen Campus.

Guyana needs to ensure that there are very few or no politically-appointed decision-makers in the oil and gas sector to prevent the industry from deepening racial and political differences and creating uncertainty in decision-making, Petroleum Advisor to the President, Jan Mangal has said.

Director of the Guyana Oil and Gas Association (GOGA), Attorney-at-Law, Nigel Hughes also expressed similar views during a panel discussion on Thursday at the inaugural Guyana International Petroleum Business Summit and Exhibition (GIPEX) being held at the Marriott Hotel.

Mangal said he has already urged the Guyana government to remove the roles of politicians in laws and ensure there are strict rules on spending and regulation. “In my presentation to Cabinet last year in March, the way I try to scare them or convince them is to say that we have get it right now. You don’t know who is going to be elected at the next election so this is the opportunity now to set up the most robust systems that are more robust against meddling by politicians so let’s set up strong systems now where we remove too much decision-making by politicians ,” Mangal told a forum at the University of Guyana.

Minister of Natural Resources, Raphael Trotman has already stated that he would recommend the reduction of ministerial powers in the Petroleum Commission Bill which is now before a bipartisan parliamentary select committee. He said more representatives of the political opposition and civil society would be added, based on advice by the Commonwealth and other international stakeholders. 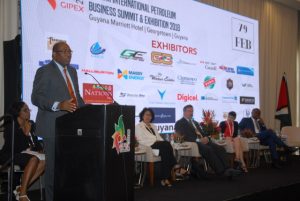 Noting that civil society in Guyana is “very weak” and the time has come for it become “more active and stronger,” Mangal called for public servants to run the oil and gas industry rather than fall victim to changes in government and race-based politics. “The industry should be managed by civil servants. If we take that path, changes in government will not impact the oil industry. If politicians are managing your industry, then come election time the industry is going to come to a standstill and six months after the elections, there won’t be anyone working in the industry; scrambling to find people,” said Mangal who has worked in the oil industry in the United States, Vietnam, The Philippines, Nigeria and Angola.

The Petroleum Advisor to President David Granger said there would be difficulties in finding the right model to manage Guyana oil industry, and cautioned that if politicians make all the decisions, “changes in government will cause major upsets in the functioning and operation of the industry”. “The problems surrounding racial politics as well will permeate the management of the industry,” said Mangal who is contracted by the Inter-American Development Bank (IDB). The Guyana government has already distanced itself from Mangal’s views, saying that he does not speak for President Granger or the Guyana government.

At GIPEX,  in response to suggestions during the question and answer session on the Regulatory Framework for the Oil and Gas Sector that government and opposition politicians should play a greater role in managing the industry, Attorney-at-Law Hughes on Thursday argued in favour of a “appropriately qualified people” who enjoy the confidence of most Guyanese instead of even having a bipartisan political structure.

GIPEX, which ends on Friday, has brought together hundreds of representatives of major international companies in the oil and gas sector. The event has been organised by the United Kingdom-based Valiant Group in collaboration with the Ministry of Natural Resources and the Guyana Office for Investment (GO-Invest).

2018-02-08
Denis Chabrol
Previous: Granger to appoint his nominees for Chancellor, Chief Justice, despite Jagdeo’s rejection
Next: Pastor jailed for 40 years for having sex with girl under 16 years old