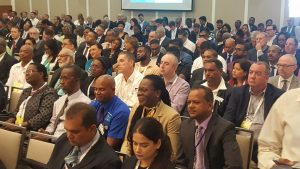 Hosting of the inaugural Guyana International Petroleum Business Summit and Exhibition (GIPEX 2018), which ended Friday, cost a minimum US$500,000 to host but officials hailed the three-day event as a wider success for the tourism and hospitality industry.

“The one that has been mentioned the least is what this event has done for the tourism industry and the services sector in Guyana,” Chief Executive Officer of the Guyana Office for Investment (Go-Invest), Owen Verwey told a news briefing. He added that the Marriott, Pegasus Hotels and small hotels were fully booked and taxi drivers did brisk business.

“Inasmuch as it does well for the networking of the oil and gas industry, it had a direct impact on tourism in the economy,” he added. Demerara Waves Online News was told that the Marriott was paid US$200,000 alone for conference room and related services for the February 7 to 9, 2018 event.

Managing Director of the United Kingdom-headquartered Valiant Business Media Group, Shariq AbdulHai said 25 percent of the gross earnings would be provided to a local education fund. Students from all of the trade schools such as the Government Technical Institute (GTI) also visited the exhibition.

AbdulHai said most of the activities were funded by the participating companies. He said a report would take between two weeks and one month to complete an evaluation and deliver a post-event report.

Verwey said the self-financing event saw local businesses getting an almost 40 percent discount to participate in the conference and exhibit their products and services.

He said the Georgetown Chamber of Commerce and Industry and the Private Sector Commission of Guyana were among several business organisations that have already provided “very positive” reviews of GIPEX 2018.