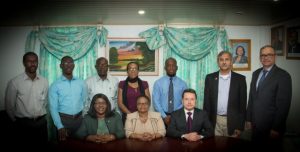 Delegations of the Siemens and the Ministry of Public Health after talks.

The three-person delegation, which met recently with Public Health Minister Volda Lawrence and a high-level team with the former rolling out its tentative plans which they felt can help accelerate modernisation plans for the country’s public health system.

“Our purpose is to make health care providers succeed (and to) do more with less,” Mr Roberto Tovar, Business Partner Manager at Siemens Healthcare said during the meeting at the Lot 1, Brickdam, Georgetown  headquarters of the MOPH.

Tovar assured the Public Health Ministry delegation that the German conglomerate is not opportunistically angling to maximise profits from the financial fortunes of the much-anticipated transition to a petro-based economy following huge offshore oil finds by the American giant, Exxon Mobil here.

“We want to be part of a society we get there to boost social impact,” Mr Daniel Fernandez, Siemens CEO South America (excluding Brazil), assured during the talks.

Fernandez said in Colombia Siemens implemented programmes which helped provide some 300,000 nationals with access to potable water and worked in the education system to help make science and technology attractive to learners because globally, “people are not attracted” to those disciplines.

On this issue, Junior Public Health Minister Dr Karen Cummings challenged the German firm to familiarise themselves with the University of Guyana (UG), especially its Natural Sciences department to help strengthen programmes there like they have done in other countries.

The APNU/AFC coalition government wants to push leasing and where appropriate, retrofitting of equipment to improve health-sector services Lawrence said.

Among some of the ambitious plans she outlined included “leasing of an entire laboratory…to bring (improved) service to our people”. In addition, there are projections to “fully equip” the local reference laboratory to deliver a large range of services to Guyanese.

Large, newly-built hospitals in Barima/Waini (Region 1) and East Berbice/Corentyne (Region 6) will offer a diverse range of services for those residents to narrow the gap with health services available in the capital.

“We want (our) people enjoy being healthy,” Lawrence said.

She said the likely partnership with Siemens, which will prioritise fighting cancers, cardiovascular ailments and non-communicable diseases (NCDs), is part of a wider long-term vision which includes upgrading systems in the sprawling hinterland “is our priority for 2018”.

Siemens started in the late 19th century (1896) with manufacturing of industrial X-ray appliance for medical diagnostics.

Tomosynthesis, is “a method for performing high-resolution limited-angle tomography at radiation dose levels comparable with projectional radiography. It has been studied for a variety of clinical applications, including vascular imaging, dental imaging, orthopaedic imaging, mammographic imaging, musculoskeletal imaging, and chest imaging,” and online source explained.

It said in its 120-year existence, the company has been granted some 12,500 patents globally; amassed over 46,00 employees; has access to 1.2 billion of the world’s population; operate with an annual revenue of some £13.5B and is determined  to add Guyana to the other 75 countries in which they  permanent presence.

Importantly for the Public Health Ministry, Siemens offers point of care (POC) services which, according to the document, include multiple sites, hundreds of instruments, thousands of operators and “provides full control over our customers’ testing environment”. 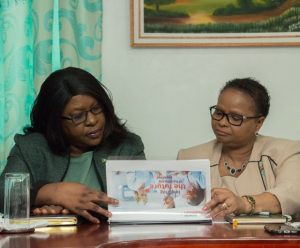 “I can attest to the unparalleled value Siemens can bring to the local health sector,” Guyanese-born Mr. Mike Singh was quoted as saying in a Public Health Ministry.