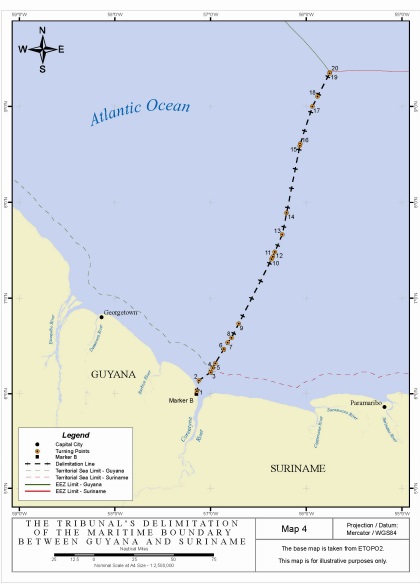 The settlement of the Guyana-Suriname maritime boundary dispute several years ago was an incentive for ExxonMobil to explore and eventually find huge oil fields offshore this country, former Head of the Frontiers Division of the Ministry of Foreign Affairs, Keith George said.

“If it weren’t for the 2007 Arbitral Award, Liza would not have existed. Liza is just a few kilometres away from where Suriname itself was claiming and Exxon would have been even more fearful because of what Suriname did in June 2000; it used its gunboats,” said George who is currently Guyana’s Ambassador to Suriname.

The dispute was settled by the United Nations Tribunal on the Law of the Sea in 2007, seven years after Surinamese gunboats chased out a Canadian oil exploration rig from an offshore concession that had been awarded by Guyana. In a surprise move that had caught Suriname by surprise after the June 2000 incident, Guyana took its case to the Tribunal in 2004.

“Because of the fact that we have a boundary, we can move forward and Suriname can move forward as Caricom (Caribbean Community) partners,” George told a University of Guyana-sponsored conversation on Law and Society titled “Guyana’s Borders: Boundaries, Barriers, or Bridges”, held at the Theatre Guild Thursday evening, January 1, 2018.

Meanwhile, the Guyana Ambassador to Suriname remarked that despite the outstanding land boundary dispute over the New River Triangle, Guyana is Suriname’s fifth largest trading partner. “Especially in relation to Suriname, our borders are not barriers,” he said. George noted that between 2014 and the first half of 2017, trade between the two countries was valued at an estimated GY$53 billion ; GY$37 billion of which was in Suriname’s favour “so we have a huge deficit in spite of the fact that they are claiming our territory”.

The land boundary dispute is said to be the agenda of a joint commission between the two neighbouring South American countries.