Guyanese among 46 arrested in New York 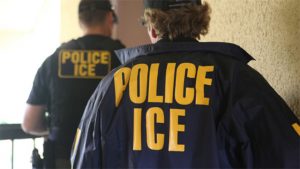 Two Guyanese were among 46 foreign nationals taken into custody during a five-day operation in western New York, in the latest reported crackdown on at-large criminal aliens, illegal re-entrants, and other immigration violators, the United States’ Immigration and Customs Enforcement (ICE) said.

The agency indicated that the Guyanese man and woman would remain in custody and could eventually be deported to their native country.

ICE said the 23-year-old Guyanese male has been already convicted for driving while his ability was  impaired and harassment, following his arrest for menacing with a weapon.  He will remain in ICE custody pending the outcome of his removal proceedings.

The Guyanese woman is 46-years old and she has been convicted for forgery and larceny.  She will also remain in ICE custody pending the outcome of her removal proceedings.

Topping ICE’s list of those arrested was a Jamaican national who was held in Albany, New York. He has prior convictions for possession of a weapon, loaded firearm, four counts of criminal sale of a controlled substance.

Of those arrested during the operation, which was spearheaded by ICE’s Enforcement and Removal Operations (ERO), 23 offenders, or 50 percent, had prior criminal convictions. Of the 23 non-criminal immigration violators, four are fugitives and six illegally re-entered the country after being deported.

The operation, which concluded January 12, targeted public safety threats, such as convicted criminal aliens and individuals who have violated our nation’s immigration laws, including individuals who re-entered the country after being removed, other immigration violators, and immigration fugitives ordered deported by federal immigration judges.

“Operations like this one demonstrate ICE’s continued focus on the arrest of dangerous criminal aliens as well as those who enter the United States illegally,” said Thomas Feeley, field office director for ERO Buffalo, which covers 48 counties in western, central and northern New York State. “Illegal aliens will not find safe harbor in New York.”

Some of the individuals arrested during this week’s enforcement action will be presented for federal prosecution for re-entry after deportation, a felony punishable by up to 20 years in prison. Those not being criminally prosecuted will be processed for removal from the country. Individuals who have outstanding orders of deportation, or who returned to the United States illegally after being deported, are subject to immediate removal from the country.

ICE says its deportation officers conduct targeted enforcement operations every day in locations around the country as part of the agency’s ongoing efforts to protect the nation, uphold public safety, and protect the integrity of our immigration laws and border controls.

During targeted enforcement operations ICE officers frequently encounter additional suspects who may be in the United States in violation of federal immigration laws. Those persons will be evaluated on a case by case basis and, when appropriate, arrested by ICE.

ICE says it continues to focus its enforcement resources on individuals who pose a threat to national security, public safety and border security. ICE conducts targeted immigration enforcement in compliance with federal law and agency policy. However, as ICE Deputy Director Thomas Homan has made clear, ICE does not exempt classes or categories of removable aliens from potential enforcement. All of those in violation of the immigration laws may be subject to immigration arrest, detention and, if found removable by final order, removal from the United States.