Urging sacked sugar workers to get registered in the right districts to vote for the People’s Progressive Party (PPP) at the 2020 general election, Opposition Leader Bharrat Jagdeo accused the David Granger-led administration of sending them home because of racial and political reasons. 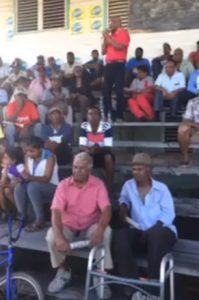 In a swift response on Wednesday, the Ministry of the Presidency slammed Jagdeo, saying that his  remarks proved who is racist. “These remarks, if they were indeed made by the Opposition Leader, clearly shows who is the racist. Fueling racial animosity and fear has been an essential plank in the PPP’s platform. For this A Partnership for National National Unity remains the basis of social cohesion. All forms of racism must be eliminated from public life,” presidential spokesman, Mark Archer told Demerara Waves Online News.

Addressing hundreds of workers at Enterprise Community Centre, East Coast Demerara,  Jagdeo said government’s decision to make the 4,763 sugar workers redundant, which would adversely impact on at least 30,000 persons, was aimed at forcing a section of the East Indian support base to leave Guyana.

“They want us to lose hope to give up on this country; the people who work in the sugar industry, who form the base of the PPP, they will just migrate, give up in life and they will succeed in the future, they will change the demographics of this country,” he said. Jagdeo urged his party faithful not to despair because that would pave the way for A Partnership for National Unity (APNU) and Granger to succeed.

The former Guyanese leader also pointed to a United States diplomatic cable on June 27, 1974 released by Wikilkeks that had characterised Granger, a then major of the Guyana Defence Force, as an anti-East Indian racist to contend that the sugar workers were sent home for racially motivated reasons.

“A few years ago in the 1970s, an American Ambassador did an assessment of Granger and it was revealed in the Wikileaks and he pointed out that Granger, this was revealed, was racist in orientation and I can’t find any other reason, outside of the fact that they want people to migrate and to change the voting pattern, to explain this callous act- sending home over seven thousand workers, except it’s an act of racism,” Jagdeo said.

He further contended that his reasoning was partly rooted in the spending of GY$2 billion annually on an electricity subsidy for Region 10 (Linden) in contrast to one percent of Guyana’s budget that was required to keep the sugar industry open.

After the privately-owned Stabroek News newspaper about two years ago had published the contents of that Wikileaks Cable, the Granger-led People’s National Congress Reform (PNCR) had stoutly rejected the then American diplomats assessment at that time. “President Granger’s personal life and his life works clearly debunks this malicious and unfounded claim. The PNCR questions the wisdom of the publication of this dated US Diplomatic Cable without a right of reply or any other supporting evidence.”

The Opposition Leader and PPP General Secretary noted that at the May 2015 general elections, at least 15,000 of his party’s supporters had not voted and the APNU+AFC coalition won those polls by just under 5,000 votes. Against that background, he called on the sugar workers to take steps to ensure that they are not only registered but that they do so in the districts where they have to vote. “I know people have to feed their families, some go off and migrate and come back,  stay on the list. Stay on the voters’ list; we can’t let them succeed,” he said.

He also warned that if the 2020 general elections are rigged, “we are not going to take it lying down like in the past”. “The biggest concern among most people here is that they know we have the support to win the next election but they are worried about the stealing, given the nature of these people, but if they steal the elections or they attempt to steal the elections, we will not be sitting down because we will be fighting an illegitimate government and any form of struggle, any form of struggle, would have to be waged because this is not like in the past,” he said.

Meanwhile, he promised sugar workers to mobilise some funds from private contributors to help support them while they are unemployed but noted that the chances are slim because of the economic downturn.

He also restated that if the PPPC returns to office, they would receive a monthly stipend. “If we can do it for Linden and we can do it for other places, then we can definitely do it for the sugar workers,” he said.

The National Assembly last week approved GY$1.9 billion to pay severance to the dismissed sugar workers. Those eligible for GY$500 million or less would receive their payments in full this month-end and the other will receive 50 percent this month and the remainder on or before December 31, 2018.

The Guyana government has repeatedly justified the closure of the Guyana Sugar Corporation’s Skeldon, Rose Hall, Wales and Enmore (East Demerara) estates because the national treasury could no longer afford to bail out the ailing entity at an average of GY$1 billion monthly.

The United Kingdom-headquartered PriceWaterhouse Coopers has has been hired by government to valuate those now closed estates to prepare them for sale.

The privately-owned Nandkumar Rice Mills is interested in taking over Skeldon and Demerara Distillers Limited (DDL) wants to purchase Enmore to produce molasses for its booming rum industry.