Brazilian women among four arrested during shootout with police 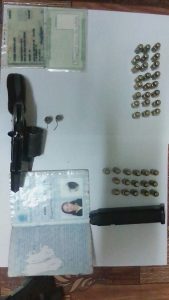 The .38 revolver, magazine, ammunition and other items that police recovered from a house at Tabatinga, Lethem during their investigation of a robbery in that town.

Two Brazilian women were among four persons nabbed following a shootout Tuesday night in Lethem, as police probed an armed robbery earlier in the day that led to the arrest of three Brazilian men.

“Acting on information, ranks went to a house at Tabatinga, Lethem about 22:30hrs last (Tuesday) night and on arrival were forced to take cover as several rounds were fired at them from inside of the building.,” the Guyana Police Force said in a statement.

Police said they recovered one .38 revolver, one 9 MM magazine and forty-two live rounds of ammunition  in the house.

Lawmen cordoned off the area and, according to the Force, used their tactical training to gain entry into the building.

The four persons arrested include the two Brazilian women.

Meanwhile, police said they have identified the three Brazilian men who robbed a cell phone and jewellery store in the commercial district of Lethem at about 3 PM at gunpoint.

Two cellular phones were said to have been in the possession of Pinha and the teenager at the time of their arrest at a nearby food shop run by someone named “Fifty”.

Investigators said the men and the boy entered the cellphone and jewellery shop where they tied up Maxine Buckley and demanded cellular phones, jewellery and her husband’s car keys. In their bid to escape in his car, they damaged the vehicle and exited and fled on foot.

2018-01-24
Denis Chabrol
Previous: Guyanese among 46 arrested in New York
Next: Old-age pension books to be phased out