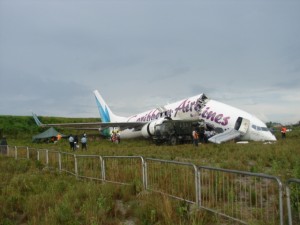 HARTFORD, Conn. (AP) — A federal judge is considering whether an airline company should pay damages to a Connecticut woman injured in a plane crash in Guyana, South America, in 2011.

Judge Michael Shea in Hartford presided over a non-jury trial this month in a lawsuit by Waterbury resident Indrawatie Shiwbodh against Caribbean Airlines. The judge is expected to rule after Feb. 9, when final briefs are due.

Shiwbodh was among 157 passengers and six crew members on a Boeing 737-800 that overshot the runway and broke in half at Cheddi Jagan International Airport. No one died, but dozens of people were injured. The flight originated from Kennedy International Airport in New York.

The airline settled lawsuits by more than 150 other passengers for undisclosed amounts. Only Shiwbodh’s lawsuit went to trial.