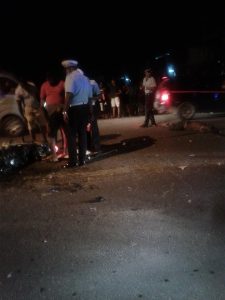 The accident scene on Mandela Avenue in which Shaquille Brown died after he slammed into a car.

Boxing Night 2017 was marred by two accidents in the county of Demerara, resulting in the death of  the son of a popular city repairman and an East Coast Demerara resident.

Dead is Shaquil Brown, the son of well-known repairman, Curtis “Cocoa Tea” Brown, of Norton Street, Lodge. Brown was reportedly riding a motorcycle with a plate marked “On Test” when he slammed into a car on Mandela Avenue aback the Botanical Gardens.

The driver of the car was rushed to a city hospital for emergency treatment.

Also killed Tuesday night is 43-year old Salim “Tony” Deen of Mon Repos, East Coast Demerara. He lost his life when he struck a utility pole at Providence, East Bank Demerara in the vicinity of the cricket stadium.

The Guyana Police Force said Deen was speeding when his vehicle hit a lamp post erected at the intersection on the center of the Providence Public Road ,in the vicinity of the Stadium.

Investigators said the morcar, PGG 2276, was proceeding south along the western driveway of the eastern carriageway allegedly at a very fast rate when Deen lost control of the vehicle which collided with the lamp post and turned-turtle. “In the process the victim was flung out and sustained severe head injuries with brain matter strewn on the road surface,” the spokesman said.

Tuesday night’s fatal accidents have brought to five the number of persons who have reportedly perished in road accidents since Christmas Eve.