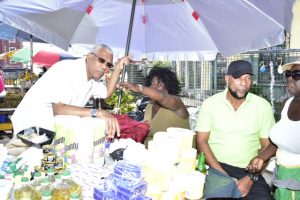 A vendor outside the building that once housed the Guyana National Cooperative Bank on Water and Cornhill Streets.

President David Granger on Sunday signaled that central government would intervene to address concerns by vendors who have been displaced on the fringes of Stabroek Market, more than one year after they had been removed ahead of Guyana’s 50th Independence Anniversary.

After several vendors outside the old Guyana National Cooperative Bank (GNCB) and the Guyana Fire Service told him that business was not too bright because of their location and weekly rentals, he promised that central government would meet with vendors to ensure that they are not virtually pushed out of business.

“We have to sit down with City Council and decide how we can be more equitable… When I went to City Hall I said vending is a legitimate economic activity and we want to ensure that we provide the greatest happiness for the greatest number. 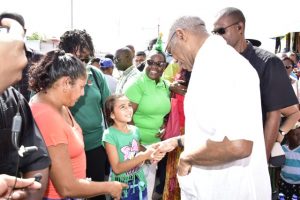 The President indicated that such a meeting could be held as early next year- January, 2018.

Minister of Communities, Ronald Bulkan, who is responsible for local government such as the City Council, was also absent.

When the vendors had been removed in 2016, many of them had been critical not only of City Hall’s councillors and the Town Clerk but also of the Granger-led administration, stating then that their livelihoods had been badly affected. Before the vendors were allowed to occupy areas closer to the market, they had been relocated to a vacant plot of land at Hadfield and Lombard Streets for several months until the owner had said no more extensions would have been granted. 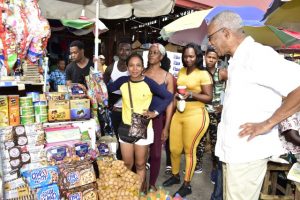 Demerara Waves Online News had been told by reliable sources that the vendors had been removed based on direct orders from the central government’s Executive ahead of the Jubilee celebrations.

President Granger was warmly welcomed and greeted by Guyanese of all walks of life and held recently-born babies. He shared out lapel pins bearing his portrait as well commemorative coins.

Encircled by numerous bodyguards, the President walked through a very congested section of Water Street, narrowed by vendors who have extended their stalls further on the roadway for the Christmas Season.

The Ministry of the Presidency said in a statement that the President greeted excited residents and seemed to be in high spirits, taking the time to talk with those he met about his plans for the Christmas season.  President Granger also could not resist some of the Christmas Eve day bargains and made a few purchases along the way.

Asked what his greatest Christmas wish is, the President replied, “I want to be in the bosom of my family. That is very important to me. I would like to see peace and goodwill to all men. That is what I want,” he said.