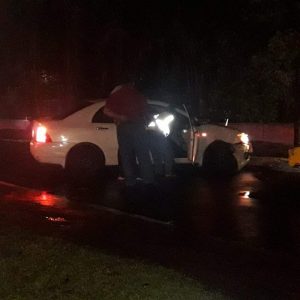 The car whose front was rammed by a vehicle in which the robbery victims were travelling as they tried to evade the bandits.

Gunshots rang out Thursday night during a robbery a short distance from State House, the President’s official residence.

The Guyana Police Force said the bandits snatched GY$1.4 million from 24-year old Deepak Baldraj, the General Manager of Yokohama Trading, a vehicle importing company. He told police that the money was in his pocket and glove compartment.

Police confirmed that the incident occurred at about 7:10 PM at the corner of Middle and Carmichael Streets, Georgetown.

Balradj told police he could not identify the two men who snatched the money while he was PVV 7514 proceeding south along Carmichael Street in the company of Davendralall Ramlall.

He said the perpetrators, who were in a silver Premio motorcar, passed them and blocked them from proceeding further.  The businessman said the bandits exited the vehicle they were travelling in and began shooting at the car that he and Ramlall were travelling in.

After grabbing the cash, the victims said the bandits escaped south along Carmichael Street. Neither Balradj nor Ramlall was injured.

Balradj said he then reversed into PSS 77 and came to a stop. The driver of that car received minor injuries. Several persons at the scene told Demerara Waves Online News that bandits opened fire on a car at the corner. In an attempt to evade the robbers, the driver reversed north along the eastern carriageway of Carmichael Street and slammed into the front of a car that was heading south.

Detectives said they found one 9MM spent shell at the intersection of Carmichael and Middle Streets.

However, sources said police were puzzled how one .380 live round was on the floor of Balradj’s car.

Heavily armed police quickly responded and cordoned off the area. The car transporting the robbery victims was escorted to a nearby police station.

One of the persons at the scene quipped that the occurence was “an accident as a result of a robbery”.

In recent weeks, there appeared to be a spike in armed robberies and carjackings. Three persons, including an ex policeman, were arrested less than one week ago in connection with the carjackings.