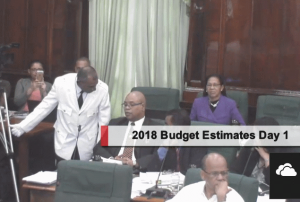 As parliamentarians were up to 6PM Monday awaiting the resumption of the Sitting after a fracas involving opposition People’s Progressive Party (PPP) parliamentarian Juan Edghill when he was refused an opportunity to speak, Police Commissioner David Ramnarine said a probe would be launched.

“There is some preliminary work being done, yes,” Ramnarine told Demerara Waves Online News but he could not immediately say what offence might have been committed.

Since Monday’s sitting of the House was suspended at 12:30 PM,  up to shortly after 6 PM the work of the Committee of Supply to consider the estimates of expenditure for 2018 had no resumed.

Members of the media were instructed to leave the Chamber and the lights and air condition units were switched off. However, the opposition MPS said they would remain the Chamber until 10PM, the time at which Monday’s sitting was scheduled to end.

However, Edghill told Demerara Waves Online News that he has not been questioned and he was seated in the Chamber awaiting the resumption of the sitting.  He denied committing an offence and the police had no legal right to remove him from the House. “I haven’t committed a crime and so I cannot come under any police investigation and I am in the National Assembly where I have full immunity to speak and represent the people of Guyana.

Earlier Monday, Edghill refused House Speaker, Barton Scotland’s instruction to sit. When the lawmaker refused instructions by the Sergeant-at-Arms, the House Speaker called Tactical Services Unit and members of other police detachments who are stationed at Parliament Building to remove him.

At that juncture, several of Edghill’s colleague PPP parliamentarians encircled him to block the police from removing him from the Chamber. The House then descended into chaos with opposition MPS and police seen pushing each other and themselves as they sought to prevent the lawmen from getting close to Edghill. 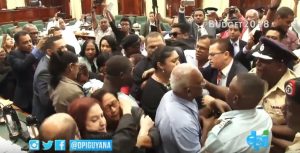 The incident all started when the PPP parliamentarian defied the Speaker’s instruction and continued to question the allotted duration for grilling the responsible ministers for the Ministry of the Presidency which for 2018 National Budget will have four additional budget programmes.

Speaker: Aren’t you going to have your seat, Honourable Member”

Edghill: So we are not going to be allowed scrutiny in the House, Sir?

Speaker: Honourable Member, would you have a seat, please, Mr Edghill?

Edghill: Mr. Speaker, I would like to have a response to this.

Speaker: Honourable Member Mr Edghill, you are out of order.

Speaker: The Honourable Member is out of order and I must order you to leave this Chamber and take no further part in the business of this matter. Honourable Member… Sergeant-at-Arms, you will take steps to enforce the Speaker’s direction. If you need assistance then you will have to get it.

Meanwhile, several government ministers sharply criticised the episode in the House, the second such similar in less than one month, coming after the opposition PPP parliamentarians had chanted and held placards to disrupt President David Granger’s address to the Parliament

Describing today’s incident as “a fast slippage into disorder”, Minister Trotman said, “I believe that after today, the Speaker certainly has a duty to call in the Chief Whips and maybe even speak to the Leader of the Opposition, and even the President about whether or not we want to continue as a Parliamentary Democracy, and be seen as one or be labelled internationally as a bunch of hooligans.”

In addition, Minister Trotman said the Opposition’s actions today took the National Assembly to its lowest ever.

Minister Trotman, himself a former speaker, reminded that Doctor Barton Scotland was acting within the ambits of Parliamentary procedure and encouraged the opposition to bring a quick resolution to the matter.

“As a former Speaker… the Speaker from what I have seen has taken all the correct procedural steps and it is for the Clerk if he feels that the Sergeant-at-Arms is incapable of enforcing the speaker’s ruling to invite the Police in, and none of us would like to see chaos erupting further in the house. There is enough of it. At the end of the day, the parliamentary system we practice under is where the Speaker is the presiding officer, and that presiding officer must be shown respect and the dignity of the house has to be maintained. I would urge the members of the Opposition to try to de-escalate the situation. The speaker cannot be expected to assume the chair where there has been a breakdown of order”, he emphasised.

2017-12-11
Denis Chabrol
Previous: ExxonMobil says signing bonus is US$18 million; calls for disclosures by all companies
Next: PPP member jailed for dumping faeces on Freddie Kissoon