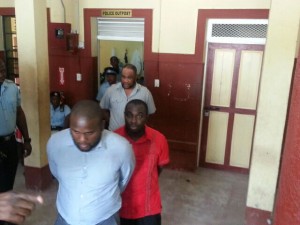 Opposition People’s Progressive Party  (PPP) member, Jason Abdulla was Monday jailed for six months after he was found guilty by City Magistrate Judy Latchman in connection with the dumping of faeces on Kaieteur News Columnist Freddie Kissoon seven years ago.

However, former  Presidential Media Liaison Officer under the PPP administration, Kwame McCoy, and self-confessed death squad member Shawn Hinds were found not guilty of the offence of common assault.

Back on May 24, 2010 at about 7PM, Kissoon had just emerged from Nigel’s Supermarket on Robb Street and already entered his vehicle when a man walked up to him and threw the faeces in his face.

Kissoon managed to drive behind the perpetrator, who ran north along Light Street then west into North Road before jumping into a waiting white AT 192 Toyota Carina motorcar and escaped.

At the time of the incident. Kissoon had been fiercely critical of the PPP and in particular now former President, Bharrat Jagdeo.