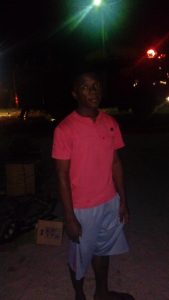 For many there will be a joyous Christmas but for the Lampkin family they will have a black Christmas  because fire destroyed their two-flat house at 119 Wall Street, Self Help Housing Scheme, Amelia’s Ward on Monday night, leaving nine persons, including six children, homeless.

The fire which started at about 7:30 PM, in the rear bedroom of the top flat completely destroyed everything.

Dylon Lampkin, who occupied the bottom flat, said he was not at home when the fire started. “I came in from town (Georgetown) and was just in time to break in de bottom and save a few things but everything gone. My sisters and their children live upstairs and they loose everything nothing ent save including important documents.”

According to an emotional Lampkin the house is owned by he and other siblings after their parents died. He said he has been living there for the past 45 years. He said he and his sisters- Danette, Sue and Denise Lampkin occupy the top flat.

Dylon was unsure what caused the fire but was told that his mentally challenged nephew was playing with matches and lit a mattress.

While the family is contemplating their next move especially at this time of the year, 17-year old Mark Miggins is more emotional because he lost everything for school. Miggins, a fifth form student of the Linden Foundation High School, is worried about the impact the blaze would have on him  because he lost his school uniforms, books and more important his laptop with his School Based Assessments (SBAs). “I am writing six subjects at CXC next year and me laptop and all my SBA gone. I don’t know what to do now; I wish I could get another laptop to do my work.”

Neighbours of the Lampkins say the Guyana Fire Service was called long before they arrived and they all said that if only the truck had arrived earlier they could have saved the house.

One neighbor said she called the fire station many times and other neighbours called too and at one time a girl answered saying “we get the call and we wukking on it but we ent know is where”. According to the neighbor the fire officers in Linden need to be more proactive.