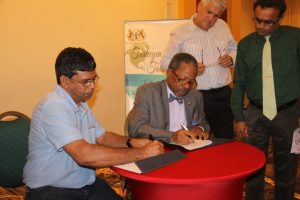 Chief Executive Officer of Nand Persaud Group of Companies, Rajendra Persaud and Vice Chancellor of the University of Guyana, Professor Ivelaw Griffith sign a memorandum of understanding to establish a soil and water testing facility at the Berbice Campus.

One of Guyana’s leading rice manufacturers- exporters has agreed to help the University of Guyana (UG) establish a GY$40 million soil and water testing research centre at the Berbice Campus.

The Memorandum of Understanding was signed by the Chief Executive Officer of Nand Persaud Group of Companies, Rajendra Persaud and Vice Chancellor of the University of Guyana, Professor Ivelaw Griffith at the 10th Turkeyen and Tain Talks held at the Pegasus Hotel on Thursday.

Persaud told the public forum on Climate Change that his company was motivated to ink the deal with UG because rice farmers are not taking a scientific approach to their work. “We take this gesture to do this here because we feel that farmers are doing things and they are not doing it very scientifically,” he said.

While the center would be located in Berbice, he said it would be accessible to farmers from other areas of Guyana.

He expects that the centre would help rice farmers conduct soil tests with the aim of increasing yield by applying the right fertilizer and eventually lower their cost of production. “As a company, we would like to see the industry be successful,” he said.

The CEO of Nand Persaud forecast an increase in demand for rice by Cuba and Mexico which together import almost one million tonnes of the grain, while Guyana exports half of that amount. “With those two markets, we cannot supply enough rice so I think we need to start doing things more scientifically so that we can maximise yield, maximise profit for the farmers and I think this lab will definitely help farmers to do better,” he said.