FAO to fund UG’s establishment of food and nutrition institute; studies on agriculture 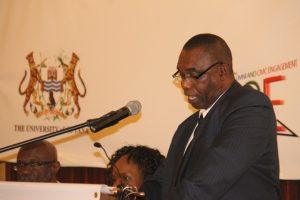 The Food and Agriculture Organisation (FAO) has announced that it will be supporting the establishment of a Food and Nutrition Institute at the University of Guyana (UG) and help that tertiary institution conduct several studies on climate change related to the agriculture sector.

The announcements were made by the FAO Representative in Guyana, Reuben Robertson at the 10th Turkeyen and Tain Talks, a public forum on various national issues that is organised and held periodically by UG.

He said the US$30,000 institute, which would be established at the Turkeyen Campus, is a tangible contribution to partner with UG in its ongoing leading role in Guyana’s development.

Saying that the focus on food and nutrition security is in line with its global, regional and local commitments, Robertson said FAO and UG would work together towards the establishment of the institute. “Our goal will be to work with the university to strengthen this programme with the expectation that in the final analysis the national capacities will be enhanced and moreover good governance will be established for food and nutrition security throughout Guyana,” he said.

The FAO representative said food and nutrition security is at the helm of FAO’s programme in keeping with its global, Caribbean and local commitments such as the Sustainable Development Goals as set by the United Nations.

He also announced that the FAO would be providing US$100,000 to UG to help that tertiary education institution conduct a number of socioeconomic  and environmental studies next year that will feed into the national comprehensive proposal for adaptation to climate change in the agriculture sector.

With the university heightening its public visibility and contribution to discussions on a wide variety of issues of national concern through the now one year old Turkeyen and Tain Talks, Robertson hailed UG’s thrust in forging partnerships.

“The university is on the right path, forging smart partnerships for resource mobilization, enhancing the quality of the programmes it delivers, while at the same time expanding into new frontiers including research and the provision of high quality technical services,” he said.

The FAO, a specialised technical assistance agency of the United Nations, is leading the charge in environmental and social safeguards and standards, classify risks and build resilience to cope with the impact of climate change.