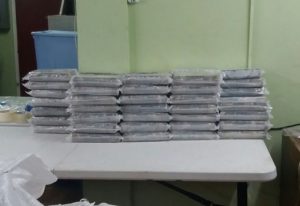 The packets of cocaine that CANU says were found in bags of rice that had been packed in shipping containers destined for Belgium.

More than 67 kilogrammes of cocaine in a consignment of rice that was destined for Belgium have been found after searches of several shipping containers, the Customs Anti-Narcotics Unit (CANU) said Monday.

The anti-drug agency said a broker, “responsible for the shipment”, has been taken into custody to assist with the probe.

CANU agents and the the Container Control Programme operatives collaborated to find the cocaine in sealed 45 kilogramme bags of rice.

The law enforcement agency said the exercise saw the unloading and searching five rice-filled 20-foot containers. The containers were scheduled to leave Guyana the evening of the said Friday 27th October, 2017. 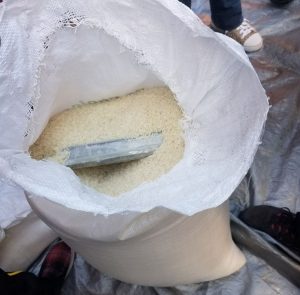 One of the the packets of cocaine in a bag of rice.

At least one of the bags seen in pictures provided by CANU shows that the white rice was packaged for SF Trading BV, Nederland by Golden Grains Investments Limited, 111 Barr Street, Kitty, Georgetown.