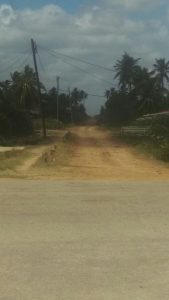 The No. 58/59 access dam which will be upgraded to an all weather road.

The proposed ‘Upper Corentyne all-weather road project’ will be a catalyst to the economic development of Region Six (East Berbice-Corentyne) since it will see the cultivation of over 90,000 acres of farm lands, a senior government official in the region said.

Regional Prime Ministerial Representative, Gobin Harbhajan stated that more than 50,000 acres of land will also be made available to farmers beyond the Canje Creek area.

The proposal submitted by the regional rep. with the support of farmers on the Corentyne outlines the construction on all purpose road from the No. 58/59 village area spanning to the Canje Creek.

It is estimated to be approximately 33 kilometres long and 36 feet wide.

According to Harbhajan, there is an existing mud dam that extends to the Canje creek at the pinpointed area but it is currently in a deplorable and impassable state resulting in huge acreages of cultivated lands being abandoned.

He stressed that the all-weather road project would benefit over 8,000 families and will see heightened production of agriculture in Region 6.

“This project is needed to help open new agricultural lands providing more opportunities to venture out into other dying areas of agriculture”.

The PM rep. stated that due to the deplorable state of the No. 58/59 access dam, rice cultivation has decreased and with the all-weather road project, farmers would be able to cultivate under any adverse weather conditions especially in the rainy seasons.

He further noted that farming in the Canje Creek area would also see an increase in production since transportation was one of the main prohibitive factors affecting crop production.

In November of 2016, he stated, the project was presented to the Regional Democratic Council and it did not recieve the needed support to make it a reality. But as of recent, the idea was praised by the Regional Chairman and Regional Councilors who are now on board with the project.

The chairman, Mr. David Armagon in an invited comment, told Demerara Waves Online that they will need more than GYD$1.6 billion to complete the project, a sum that is triple the allocation for the capital projects.

“That project is too costly to be under taken by the region so it will need to be handled by central government. It is a good project that can greatly benefit the region but we can’t find that kind of money to under take a new project when there are a number of existing programs not being looked after”.