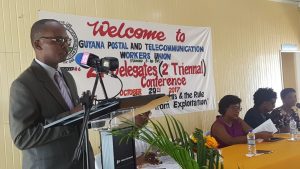 The Guyana Postal and Telecommunications Workers Union (GP&TWU) on Sunday said it wants the Ministry of Social Protection’s Department of Labour to invoke arbitration in a deadlocked pay dispute with the Guyana Telephone and Telegraph Company (GTT).

He said the union has been waiting on the Labour Department to set up the arbitration tribunal, with the latest formal reminder having been sent last week. There are 240 unionised workers at GTT.

The union boss accused the Department of Labour of being “very slothful” in addressing issues. “More so it appears as when it comes to these multinational companies, it is a kind laid back approach when it comes to dealing with them as they should,” he said. 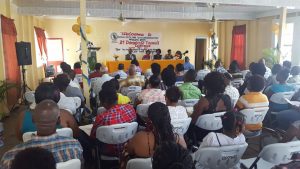 After the phone and data provider announced in February 2017 that it was sending home 120 workers as part of a restructuring plan, the GP&TWU moved to the High Court and blocked the unilateral move. Shepherd said although the phone company signed a consensual order, it still went ahead and laid off 15 workers.

“The union is presently using all the necessary industrial relations tools at its disposal against this contemptuous action or attitude by the company,” Shepherd said.

The President of the union said further legal action would be taken to cite GTT for contempt and for the laid off workers to be reinstated or compensated.