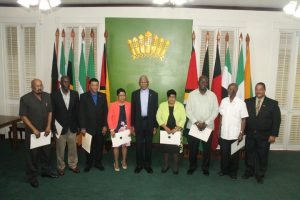 Guyana’s first ever eight-member Local Government Commission, whose mandate includes hiring and firing officers, was Monday sworn in as a means of ending illegality and ministerial involvement in the affairs of the local government system, President David Granger said.

He said the swearing in of the Commission signals respect for constitutional rights and protections. Local democracy- the third tier of governance-, he said, is aimed at involving as many persons as possible in managing and developing communities and neighbourhoods in which they live. Granger added that local government also seeks to promote the economic, environmental, cultural and social well-beings of citizens.

“The Local Government Commission, therefore, can provide for the autonomy of local democratic organs in  accordance with the Constitution. It will prevent the unlawful, executive and political intrusion into the work of local government organs and it will promote greater efficiency and effectiveness in the delivery of public services to citizens and their communities,” he said.

The Guyanese leader also charged the commission to craft a Code of Service to guide their operations in several “vital values” including transparency and “reinforce public confidence in the way Commissioners perform their duties”.  The other values he listed are accountability, dignity, diligence, duty, honour, integrity, loyalty and objectivity.

Mingo and Corlette are long-time senior members of the People’s National Congress Reform (PNCR), the largest and most influential of the parties in the governing coalition, while Whittaker and Collymore are former Local Government Ministers in the People’s Progressive Party Civic (PPPC)-led administration that lost power in May , 2015. Sooba is a former Town Clerk of the Mayor and Councillors of Georgetown who was booted out of office by a no-confidence motion about two years ago. Williams is the Alliance For Change’s General Secretary, while Garnett is a well-known trade unionist.

While in government, the PPPC had opposed the establishment of the Local Government Commission, saying that it would usurp powers of the ministerial executive.

Other constitutional bodies, he said, that have been sworn in over the past several months include the Ombudsman, Public Service Appellate Tribunal, Public Procurement Commission, Judicial Service Commission, and Chairman of the Guyana Elections Commission as well as the regular grant of national awards in keeping with Guyana’s Constitution.