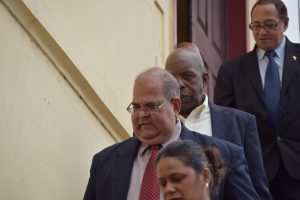 The eight Directors of the Guyana Bank For Trade Industry Limited were Monday released on self bail after they all appeared in the Georgetown Magistrates’ Court charged with failing to comply with an order of the High Court.

The  High Court had issued a Production Order for the bank to provide information about the movement of US$500 million in the account of the Guyana Rice Development Board.

When the charge was read they all denied the allegation which stated that on the 7th September, they failed to comply with a Court order made by the Chief Justice.

Sources said they were given six weeks more to produce the documents but they had not complied.

The eight accused were represented by Attorney-at-Law Nigel Hughes who noted that his clients were following the Court order and were last Friday granted an extension by the Chief Justice to turn over all the relevant information to the Special Organized Crime Unit. 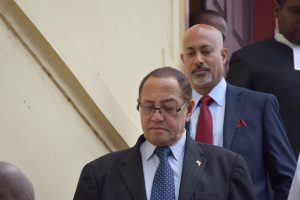 The eight accused were ordered to return to court on November 20.

Sources said bank representatives on Monday turned up at SOCU headquarters with the documents the bank had said had been destroyed, but they were promptly told to go to court .