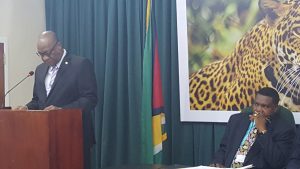 Minister of State Joseph Harmon and Permanent Secretary of the Ministry of the Presidency’s Department of Public Service, Reginald Brotherson.

The Guyana government on Thursday announced new wage increases for 2017.

Permanent Secretary of the Department of Public Service of the Ministry of the Presidency, Reginald Brotherson said the increases retroactive to January 1, 2017 would cost GYD$3.5 billion  for the estimated 14,000 public servants.

Brotherson said those earning more than GYD$1 million would not be receiving an increase.

Four thousand of the 10,000 were previously contract workers.

Minister of State, Joseph Harmon said the Guyana Public Service Union has been informed that the “final offer” are:

Brotherson said the Guyana Public Service Union did not propose an increase in the negotiations that began last month.