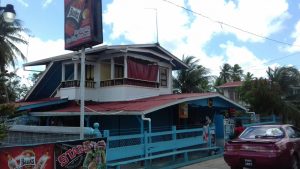 Three armed bandits on Tuesday night carted off with an undisclosed amount of cash and jewellery from an East Canje, Berbice bar.

Proprietor of the business located in Canefield, 43-year-old Drupattie Azeez, told Demerara Waves Online News that around 8:00 pm, they were in the process of closing the shop when her 25-year-old daughter was confronted by one of the bandits.

At the time, her two workers and her niece were at home at the time.  “We was locking up at the time and my one worker was in front with my daughter when see one of the man walk in with a gun and she holler then the two other ones rush in and tell both ah them nah fah holler and he shove them inside”.

The woman relayed while this was ongoing, she along with her niece and her employee hid inside of the kitchen.
“We hear the scream and I come and peep and saw one of the man and run back inside and hide in the kitchen with them”.

The businesswoman told Demerara Waves Online that police arrived on scene just mere minutes after the ordeal.
This is not the first time the business was robbed. According to Azeez, in 2010, her now deceased husband was shot in the leg by bandits.