Politics of gold mining: Trotman, Broomes and Blocks…to cap or not to cap syndicates’ mining blocks 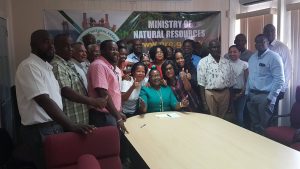 Small-scale gold miners, who have banded themselves together in syndicates, on Thursday demanded that they be given more than 10 mining blocks, at a meeting that clearly pitted Junior Minister of Natural Resources, Simona Broomes against Senior Minister, Raphael Trotman.

Chairman of the National Mining Syndicate (NMS), Renwick Solomon restated that the syndicates do not want the number of blocks to be limited. “Indeed, we have an issue with it because we believe that capping shouldn’t be the order of the day. It should be opened to the level at which we can afford  to apply for these lands so that the syndicate initiative will have a life after now.”

Trotman was not at the meeting, as he attending an oil conference in neighbouring Suriname. However, he told Demerara Waves Online News that he last Tuesday held a meeting with the Guyana Geology and Mines Commission about several mining issues including syndicates and concerns about that regulatory agency’s delivery.

Saying that the Junior Minister of Natural Resources was mandated to follow up, the Senior Minister reiterated that there must be cap, and the syndicates have agreed that additional lands would be provided if they satisfy several conditions.  “Cap wouldn’t be removed because this is a pilot project. However, we agreed that I will hold lands in escrow and once they demonstrate good environmental and other stewardship I will release further lands to them. They are comfortable with that,” he said.

Broomes hinted at the need for the laws, passed during the People’s Progressive Party Civic administration, governing areas closed to mining be reviewed.

The Junior Minister at times punctuated the meeting with taking credit for acquiring Cabinet approval for the proposal to establish mining syndicates and vowing to stick with the miners in ensuring their welfare is looked after. “Have I ever failed you coming into this sector? Have I ever moved my eyes off of all the folks?,” she asked rhetorically.

She stated that she would no longer be involved in mining because her duty was to serve in improving the livelihoods of small miners. She recalled that President David Granger had said to her during the peak of criticisms when she had been appointed that “Guyana needs you, you have value”. “He took blows when he appointed me, if you could remember but you see I say that to say this that  with purpose always cometh blows,” she said.

In turn, several members of syndicates showered praise on Broomes while at the same time issued veiled criticisms of Trotman who has insisted that the number of mining blocks per syndicate be capped at 10 blocks and that the model be viewed as a pilot project. 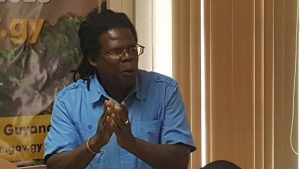 Syndicate member, Roy Kingston called on his colleagues to be wary enough of the political environment and said openly that Broomes and Trotman have different positions. “The decision-makers are politicians. We understand Minister’s position. We are not entirely clear on her Senior’s position. We have challenged him in the last meeting, I think quite openly with some of our concerns. He has tried to address it and one issue I believe we need to be clear on and be together on is this when we talk about it- the ten block issue,” Kingston said.

Kingston said broadly speaking the 10 cap approach could not be deemed a rules-based pilot for persons who have been mining for years.  Responding to Kingston, the Junior Minister urged the syndicate members to consult with him more because the ministry’s position is the Guyana government’s position. “Minister Trotman, himself, wants the best for the sector and the people…,” she remarked.

Solomon said, “I am so happy that we have a politician who is a former miner who can relate to us on that level because it is very important because for you to relate to someone you have to understand from where they are coming from and understand their background,” he said.

Those sentiments were echoed by, among others, syndicate member, Kingston. “We, as a group, are very fortunate to have a minister of government as an advocate for the issues that affect us. I want to honestly say that I do not believe that there is a better advocate in this government or in this country than Minister Broomes so it is then our obligation to be supportive of Minister Broomes’ position and we are fortunate to her for bringing us together in settings like this where we are being reminded time and again- get yourselves together, get your house in order,” he said. Kingston urged the attendees to place greater emphasis on formalising the NMS mechanism. 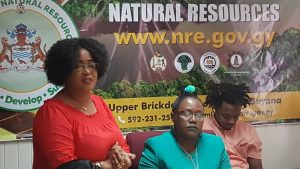 Broomes said she was unaware of the allegation, but she was aware that the syndicates met with Trotman quite recently. She promised to brief him and hoped that the issue would be resolved favourably. “It is something that  Minister Trotman himself is dealing with so I cannot change the decision. I cannot sit here and tell you you’ll get a hundred blocks,” the Junior Minister said. She added that she did not feel disrespected by the demands for more blocks and urged the miners to be confident that their struggle would be successful eventually. 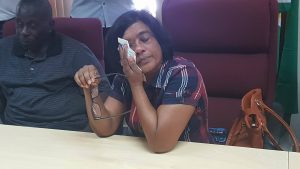 CASH-STRAPPED GOLD MINER: Juliet Parasram. She complained bitterly that business is so bad that she does not even have GYD$1,000 to give her child to go to school. Parasram said all her mining equipment is parked.

Once wealthy gold miner, Juliet Parasram, tearfully related that herself and gold miners in Mahdia have parked their equipment because they have fallen on hard financial times for about one year now. “In Mahdia, right now, single parents cannot feed their children. There are so many operations parked. My business door has closed for more than a year. All my operations have parked for more than a year. I am not working. I don’t even have a thousand dollars that I can give it to one of my children.”

She said she and other members of her syndicate have tried in vain to acquire more mining blocks. “I am saying to Minister Trotman: Please release these lands early, as early as possible. Don’t cap the syndicates. We need  your assistance. The President promised a good life, not the minister say he is going to give us a good life and I don’t want you to take it away from us. Let the President’s word stand and stand strong for Guyanese,” Parasram said.

The Junior Minister appealed to the syndicates to ensure that their administrative systems such a constitution are put in place, noting that the authorities had not first insisted that the syndicates are properly organised before processing applications for lands. “Get your house in order. You are out of order. Your home is not in order,” she said.

The Junior Minister advised miners to ensure that they document who has applied for lands to ensure there is no discrepancy over requests for lands.

Kurt Limerick of the Land Management Section of the Guyana Geology and Mines Commission is responsible for interfacing with syndicates on a daily basis.