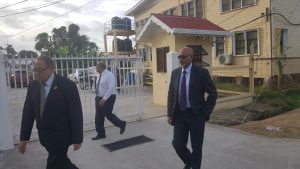 Directors of GBTI including Suresh Beharry and Robin Stoby leave the office of the Special Organised Crime Unit.

The directors of the Guyana Bank for Trade and Industry (GBTI) are expected in court next Thursday to face alleged contempt for failing to comply with a production order by the High Court.

However, one of the Attorneys-at-Law, Nigel Hughes told Demerara Waves Online News that his clients are innocent and the authorities would have to establish  that there is a valid charge.

Sources said all of the bank’s eight directors  and its Chief Executive Officer, Kathryn Eytle-Mc Lean are due to appear in court on Monday.

Those who were questioned Thursday by agents of the Special Organised Crime Unit (SOCU) of the Guyana Police Force  include  GBTI Directors, Suresh Beharry and prominent Attorney-at-Law, Robin Stoby.

SOCU wants GBTI to hand over information about the accounts of several persons, but more than one week has long passed. 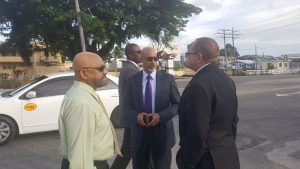 GBTI Directors in brief conversation outside SOCU after meeting with investigators.

Investigators are interested in information concerning the alleged movement of large amounts of cash through a Guyana Rice Development Board (GRDB) account held at that bank, as part of their probe into financial crimes. SOCU wants to know to whom large payments were made.

The investigation was triggered by the findings of a forensic audit of the GRDB, a para-statal agency that comes under the umbrella of the Ministry of Agriculture.

Already, several GRDB Directors are before the court on a separate matter about allegedly omitting information from the general ledger for amounts totalling GYD$362 million.

A Lower Court is in the coming days expected to make a decision or call on the several defendants who include two opposition People’s Progressive Party Civic lawmakers to lead a defence.