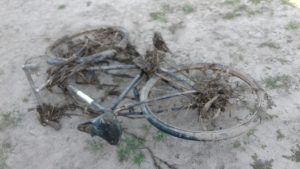 The bicycle that Archibald was riding when he vanished from his sisters while they were returning home from a birthday party.

The acting Head of the Criminal Investigations Department of the Guyana Police Force said the prime suspects have since led crime scene detectives to an area where they threw the body of Leonard Archibald overboard and his bicycle has since been recovered.

Up to Friday evening, police, relatives of the lad and public-spirited citizens were searching the Berbice River for his body.

Sources said the cycle was found aback one of the suspect’s home which is located two houses away from the Sister’s Village Magistrates’ Court, East Bank Berbice.

The teenager was last seen in the company of his two sisters while they were traversing the East Bank Public Road last Sunday evening.