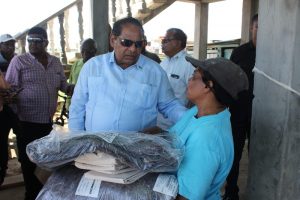 Prime Minister Moses Nagamootoo, along with members of the Civil Defence Commission (CDC), on Friday pledged their support to provide relief to residents of Bath Settlement, West Coast Berbice who were affected by the storm on Monday. 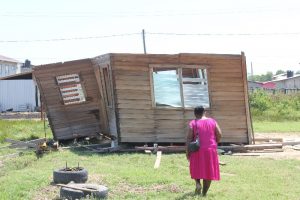 Domestic Worker, Sheila Harricharan lost her home in the storm after it collapsed with her inside. Harricharan stated that when the storm began, she noticed that her house began shaking and ran outside and was about to descend the stairs but was a minute too late. In a matter of seconds, the house collapsed. The woman was fortunate to escape with no injures but the heavy downpour damaged all of her furniture.

“I was running to get out when I feel the house start shake bad bad and when I reach on the landing, it just come right down and I duck me head and come down with it” 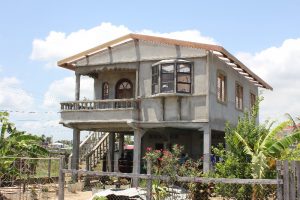 Another resident, Bohwanie Matalma, a housewife, relayed that during the storm, her family of seven was in the lower flat of the home when the storm began at around 5:00 pm. After about 10 minutes of heavy winds, they heard a loud crack and upon investigation noticed that the entire roof had been blown off. Thar resulted in major damage to her furniture and electrical appliances.
Matalma stated that they never had such an experience before and she was thankful no one got hurt.
Her neighbor a few houses away, Brain Lee,  suffered the same fate. His entire roof was blown from his house. He stated that his wife and child were forced to retreat to a neighbour’s home because electrical wires had begun sparking. He, too, suffered damage after the heavy rains destroyed his furniture and electrical appliances. Another resident, Chrandrakhali Munilall, a single mother of two, also lost her roof to the storm.
The Prime Minister, in his address to the media, noted that the Region 5 Administration, CDC and private stakeholders have pledged their support to provide materials for the houses to be repaired. He stated that although, the needs are not ‘very great’,they are pushing for the collapsed house to be rebuilt by Saturday so that the woman can return home.  “Along with this here, we are reaching out to other areas such as Linden and in the interior to reach out to Guyanese who have been affected by the storms”.
Nagamootoo further mentioned that the CDC also pledged US$100,000 to aid the hurricane relief efforts in the Caribbean.