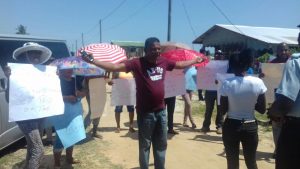 Prime Minister Moses Nagamootoo was Friday morning meeting with residents of Bath Settlement, West Coast Berbice whose houses were damaged by a recent storm, despite being greeted by protests.

On Nagamootoo’s arrival at the village, People’s Progressive Party (PPP) activist, Faisal Jafferally and a group of persons held placards. At one time, there was a heated exchange of words between Jafferally and A Partnership for National Unity/People’s National Congress Reform (PNCR) activist, Carol Joseph.

The PPP supporters held placards that read “Moses singing for his supper”, and “Nagamootoo must pay the sugar workers on time”,   while Joseph lashed back, saying “The PPP is dead”.

Although Joseph has resigned from the Region Five- Demerara/Mahaica Democratic Council- she is still very much politically active in the region. 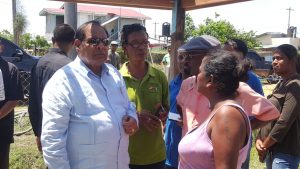 Nagamootoo has been briefing residents about government’s intervention to bring relief to them. The Civil Defence Commission has also been paying keen attention to the situation.

The Prime Minister did not appear to be distracted from his mission and several residents interacted with him.