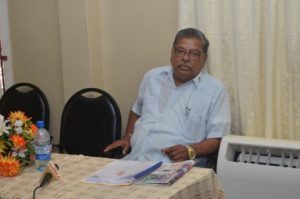 A British C-130 aircraft will not be available to transport tonnes of Guyana’s relief supplies to Antigua for distribution to several Caribbean islands that have been battered by several hurricanes in less than one month, even as Guyana’s private sector continued to provide more aid.

Announcement that the C-130 plane would not be available was announced by Director-General of the Civil Defence Commission (CDC), Retired Colonel Chabilall Ramsarup during his receipt of the PSC’s latest donation.

“We have one little problem and that is the moving of the stuff. We had anticipated that we would have a C-130 but we were told this afternoon and they told us that they can’t loan us the aircraft for the purpose of moving the supplies,” he said. Ramsarup’s announcement came one day after Minister of State, Joseph Harmon had announced that Britain would have provided the transport plane to airlift the supplies to Antigua from where the Caribbean Disaster Emergency Response Agency (CDEMA) is staging relief operations.

However, well-placed sources in the Guyana government told Demerara Waves Online News that Harmon’s announcement was premature because Britain had not informed Guyana that the plane would have been available, but had merely received Guyana’s request and was considering it.

The CDC boss said other options were being explored to get the supplies to the affected islands “as early as possible”, possibly by mid next week. That option, he said, would include acquiring fuel for a privately-owned boat to take the supplies.

Already, GAICO last week chartered a cargo plane for US$12,000 to take some supplies to Antigua.

Meanwhile,  Harris Paints International began coordinating efforts for delivery of relief items to hurricane- hit Anguilla, Barbuda, St Maarten and now Dominica. The supplies collected are scheduled to leave Guyana during the first  week of October, with a cut-off date for collection being Friday September 29th.

“Other corporate entities have heeded the call and donations were received from Guyana Times and Grace Kennedy with the latter donating much needed toiletries which will go to Dominica,” Harris said.

Anyone or company wishing to assist, can deliver the items to Harris Paints Regent or Water Street Branches during the hours of 8:00am to 4:30pm.