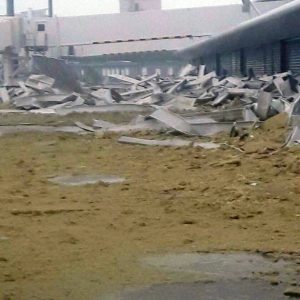 Sand was flung onto the runway and huge rocks smashed into planes as the storm swept over the tiny Caribbean island today.

The full devastation was revealed after the storm passed, with photos revealing the check-in lounge had been flooded and walkways completely destroyed.

Huge chunks of the building had also been strewn across the runway and a jet bridge snapped in half.

Hurricane Irma slammed into the French-Dutch island early this morning leaving a trail of devastation as homes, hotels and government buildings were reduced to rubble.

Mass evacuations immediately got underway as aid agencies braced themselves for a “major humanitarian response”.

So far, there has been no reported loss of life. 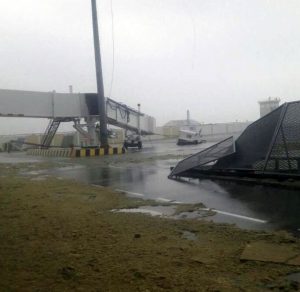 A jet bridge was torn in two (Image: Twitter)

Holidaymakers have barricaded themselves into hotels and villas as powerful winds continue to batter the already shattered island.

Alex Woolfall, who is staying on the island, told how he and other holidaymakers huddled in the concrete stairwell of their hotel as the “apocalyptic” noise of the winds roared outside.

The PR executive, from London, tweeted: “Still thunderous sonic boom noises outside and boiling in stairwell. Can feel scream of things being hurled against (the) building.”

He added: “My God this noise! It’s like standing behind a jet engine!!

Constant booms and bangs. At least concrete stairwell not moving.

Brit Carolyne Coleby, who runs a guest house on the Caribbean island of Montserrat, said locals were desperately trying to secure their houses with boards and protect what belonging they had.

She said: “The winds are starting to pick up and the clouds are coming in.

We had a sunny morning but the storm’s definitely on its way – it’s going to be spectacularly unpleasant.”

“People are now just boarding up and clearing their gardens of any potential flying objects,” she said.

“I had a sleepless night. I was very worried – I spent the night on the internet. It’s going to be the strongest hurricane ever to cross the Atlantic. I’ve no idea what to expect.”

British Airways sent an empty plane ahead of Irma to bring customers back early.

The full flight of 326 passengers touched down in the UK on Tuesday evening.

The airline also cancelled a flight from the UK heading to Antigua and then on to Tobago.

He said: “We know that the four most solid buildings on the island have been destroyed which means that more rustic structures have probably been completely or partially destroyed.”

The island has been without electricity since 6am this morning and police have reported several roofs have been torn off buildings during the storm.

France has requisitioned planes and sent in emergency food and water rations.

Irma also slammed into the Caribbean island of St Bartélemy and the larger island of Guadeloupe.

Despite the lashings of rain and wind coming from the “extremely dangerous” hurricane, temperatures in the Caribbean are around 30C.

Preparations are already underway in Florida, which could face “direct impacts,” early on Sunday morning according to the National Hurricane Centre.

Donald Trump declared emergencies in Florida, Puerto Rico and the US Virgin Islands, while officials in the Bahamas said they would evacuate the residents of six islands at the southern end of the island chain.

A mandatory evacuation was also under way in the Florida Keys, where Irma is due to land at the weekend.

Experts say the hurricane is now so powerful it is registering on devices designed to detect earthquakes.

The “potentially catastrophic” eye of the storm lashed the Barbuda just hours after officials warned people to seek protection from Irma’s “onslaught”.

Virgin boss Richard Branson revealed he is retreating to his wine cellar as Irma approaches Necker Island, in the British Virgin Islands.

The billionaire has refused to leave his retreat as the terrifying winds and torrential rain head straight towards it.

Instead he and his team will hide in the wine cellar at his luxury estate when the full force of the Category 5 storm hits.

‘We are expecting to get the full force of the hurricane in around five hours’ time, when we will retreat to a concrete wine cellar under the Great House,” Branson wrote on his blog.

“Knowing our wonderful team as I do, I suspect there will be little wine left in the cellar when we all emerge.”

Princess Juliana airport is well known for planes landing by the skin of their teeth and attracts plane spotters from around the world.

On their final approach, aircraft fly over the beach at altitudes of less than 100 feet above ground level.

People are also discouraged from hanging onto the main fence behind the airport to experience being blasted by the jet flow.