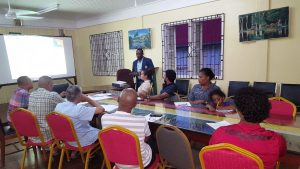 ‘B’ Division Commander, Assistant Commissioner of Police, Paul Williams outlining security plans for the Region Six. On Wednesday 30th August, 2017 Assistant Commissioner Paul Williams, Corporal 21741 Bacchus (Divisional Correspondent) and Woman Constable 21321 Brutus met with members of the Berbice Chamber of Commerce at their office to hold discussions as it relates to the Police Force ‘B’ Division and the business sector.
Commander Williams also made a security power point presentation to the gathering to outline his plans for the Division.

The Berbice Chamber of Commerce and Development Association (BCCDA) and the Guyana Police Force have agreed to establish a number of outposts in crime-prone areas.

He said two 40-foot shipping containers would be outfitted with air conditioners and other necessities. Initially, one would be located at Angoy’s Avenue and the other at Glasgow Housing Scheme.

The BCCDA wants the Guyana Police Force to establish police outposts in heavily populated areas that are prone to criminal activity, even as the law enforcement agency is reporting a decline in crime in the ancient county.

The recommendation was made by the Chamber in a recent meeting between the top brass of the Berbice Police Division.

BCCDA President, Ryan Alexander and other executive members met with  Assistant Police Commissioner Williams at the business organisation’s head office in New Amsterdam and shared their concerns and ideas to be implemented.

Chamber President, Mr. Alexander told Demerara Waves that one of the main issues highlighted is the absence of Police Outpost Stations in areas that are heavily populated and prone to criminal activity.

Alexander noted that many business owners have voiced their complaints about the high number of burglaries and this prompted the advice to place outpost offices at strategic locations.

“We noticed that in these populated areas like the East Bank area for example, there is a lot of criminal activity going on and person have asked why not put police outpost in these areas so that when stuff happens, they don’t have to contact central and this makes it easier on them and easier on the police in catching these criminals”, he said.

The Divisional Commander said the division was happy to partner with the BCCDA’s input and noted that the ideas put forward will soon be implemented. He further pointed out that there is a need for the establishment of a monthly meeting with members of other chambers who can collectively combine resources to address their concerns.

“Sometimes we find that many of these chambers have similar issues and concerns so the formation of such a meeting will give us an advantage when dealing with the concerns of the chambers and the people,” Williams said.

The President highlighted that the partnership between the police and the business community along with other stakeholders is vital to achieve their vision of a division devoid of criminal activities.

“This is the kind of partnership needed to help improve the county and make it better and we need organizations to follow suit and provide whatever help they can to better their community.

They also praised the new Divisional Commander for his efforts thus far to the ensure that the crime in the division was under control.

Assistant Commissioner Williams has already reported a 33 percent reduction in crime since his commencement as the divisional head. He gun have been solved.

He also highlighted that there were 18 reported instances of break and enter and larceny and several persons have been placed before the court for ten of them. In two of the matters justice has been served, he said.