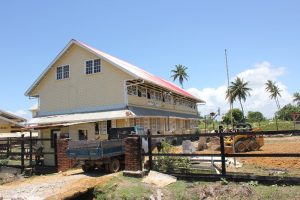 The contractor, who was accused of doing substandard works at the Manchester Secondary School resulting in cramped student accommodation, has refuted the claims recently made by the Regional Chairman, Mr. David Armagon.

The contractor, Mark Gupta, revealed that the contracting company mentioned by the Regional Chairman is owned by his brother and was not awarded the contract rather it is his company, 4A Contracting.

The works began shortly after school closed for the August holidays and should have been finished in time for the start of the new school year.

Gupta stressed that the works could not have been completed in the allotted time due the number of additional works that was included. He stressed that while works were ongoing, changes were made after a visit by the Regional Engineer.

“It was too much work for such a short period and still we tried to finish as quickly as possible. But because of some changes they made, more work had be done and it could not have been completed in the time given”.

The contractor argued that the ‘bridge’ mentioned by the Regional Chairman was done to the best standard and added that he should not have been making pronouncements since ‘he is not a contractor’.

He mentioned that the only works left to be completed are the tiling of the Home Economics Department, installation of two doors, additional works to the flooring, a bridge and the removal of the ceiling. These works, he assured, would be completed in two weeks since workmen could not work during school hours.

Parents were expressing their concern about the works being carried out and the allotted time for them to be completed.

Many stated categorically that they would not be sending their children into such conditions but they were assured by the contractor that the works would have been completed. But unfortunately, students were forced to be stuffed into the labs to facilitate them until the works are completed.

Regional Chairman, Mr. David Armagon, who commented on the issue after conducting a visit to schools in Berbice, noted that he was given assurance by the regional engineer that ‘works would be completed in time for school’ but that was not the case.

“It is very disappointing to see what kind of conditions these students are being forced to deal with all because the contractor was not working to his full capacity”.