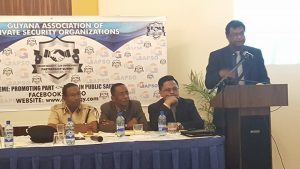 Firearms belonging to bank fraud accused Saddiqui Rassul’s security service have been seized by police and those security services with shady characters or misusing their licensed guns are on a watch-list and also risk having those firearm licenses revoked, Public Security Minister Khemraj Ramjattan said Monday.

The Public Security Minister said he ordered that the firearms that were assigned to Rasul’s security service be handed over to police because of “the fact that he was charged.”

Rasul was charged with six new counts of obtaining money (GYD$956 million) by false pretence from Guyana Bank for Trade and Industry between March 21 and 22, 2017 by falsely pretending that he had sufficient money in his Citizens Bank account to honour cheques from that bank in his name.

The Guyana Police Force on August 3, 2016 approved the granting of “additional firearm” licenses for four 9MM pistols and four shotguns to be issued to the Bartica-based Saddiqi Rasul Security Services and used by trained supernumerary constables attached to that security service. 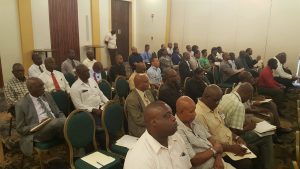 Ramjattan said he has also instructed that several more licensed to other security agencies be handed over to police “because they were doing some mischief and I also ordered some credential-checks and vetting on some others because it necessary.” He warned that if the persons, who make up the security service agencies, are found to be the bad guys,  gun licences for the entire entity would be revoked.

In his address to the Private Security Law Enforcement Partnership Summit organised by the Guyana Association Private Security Organisations (GAPSO) held Monday at the Pegasus Hotel, the Minister of Public Security said security services would have to be purged of “rogue elements” in the same way that the police force has been charged to do so.

Against the background of police inspections finding that a number of security firms have assigned firearms to unauthorised persons, Ramjattan said those licences were being revoked. “As you know, I am pretty rough. I start the revocation. We gonna revoke the licence and I have to start doing some of that because what is bad is the fact that guns are being placed in the wrong hands by security firms,” he said, while declining to call names.

He called on the 130 registered security agencies to self-regulate and monitor each other to make compliance easier by the Guyana Police Force which is responsible for site visits and monitoring in keeping with a 2009 law that governs private security agencies. “Self-evaluation is so important because it will not cost much,” he said.

Guyana’s private security sector, he said, should become a signatory to the Switzerland-headquartered International Code of Conduct for Private Security Service Providers (ICoCA) in the same way the country is joining the Extractive Industry Transparency Initiative. 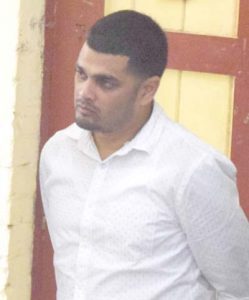 That entity secures a commitment to good governance, respect for human rights and international humanitarian law, and a high standard of professional conduct. Its operations are carried out globally, with integrity, impartiality and confidentiality. The ICoCA strives to ensure protection and provide remedy to victims of abuse by private security providers. The ICoCA endeavors to prevent excessive use of force; to prevent torture and other degrading treatments or punishments; to prevent sexual exploitation and abuse, and gender-based violence; to prevent human trafficking, slavery and forced labour; to protect the rights of children; and to prevent discrimination.

He hoped that GAPSO would be able to collectively draft a code of conduct, recruitment policies, training manuals and amendments to the law governing private security organisations.

Assistant Commissioner of Police- Operations- Clifton Hicken’s recommendation for a memorandum of understanding between the Police Force and GAPSO would help to streamline the sharing of manpower, information/intelligence and vehicles as well as training in the use of firearms.