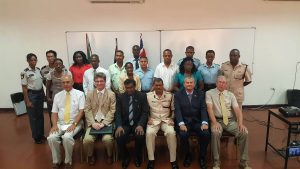 Britain’s Security Sector Reform Project assistance to Guyana has taken a new turn with the implementation of recommendations to strengthen the strategic management and approach of the security service.

Britain’s High Commissioner to Guyana, Greg Quinn said Presidential Adviser on Security, Russell Combe has recommended capacity building for the Guyana Police Force’s Strategic Planning Unit. “This training is the latest example of our commitment and it is directly linked to the interim recommendations that Russ Combe, the Security Sector Reform Adviser to the President, has recently produced,” he said.

Quinn added that the series of training programmes would be conducted during the next several months which add to assistance being provided to the Guyana Prison Service, Guyana Defence Force and the Police Force’s Special Organised Crime Unit (SOCU).

Police Commissioner, David Ramnarine added that the British security adviser’s findings and recommendations would help to build on existing successes of security delivery. “Apart from what we in the Guyana Police Force are currently doing with some level of satisfaction, the recommendations emanating from the Security Sector Reform report are intended to engage in and address the deficiencies and the manner in which we can holistically in an overall manner improve the quality of services vis-à-vis security services in the communities,” he said.

Britain hopes that the training of the Strategic Planning Unit would help it improve the operational efficiency of police and support and sustain relevant reform plans and implementation of action plans for the broader reform of the law enforcement agency. He said the research duty of the planning unit would focus on, among other things, emerging trends such as cybercrime, piracy or social violence. “Such work adds to the understanding of the threats which face this country and which need to be countered by the police; threats which can then be factored into strategic planning and implementation,” Quinn added.

In apparent reference to evidence that had flown from the recent Commission of Inquiry into an alleged plot to assassinate President David Granger that points to a range of management weaknesses, Public Security Minister, Khemraj Ramjattan remarked that the training programme being conducted by two British experts was timely. “Indeed, with all that has happened recently and highlighted in the news front-page and centre-page, concerning our police force especially its upper echelons, there is need for strategic rethink but first that unit which provides the forces strategies and policies and plans must benefit from training especially from such a close and kindred ally- the UK (United Kingdom),” he said.

The Commission of Inquiry has heard of an apparent rift between substantive Police Commissioner, Seelall Persaud, who is currently on leave, and substantive Assistant Police Commissioner (Administration), Ramnarine. Based on the testimonies, there appeared to have been a blurring of procedures or the bypassing of certain personnel in issuing instructions.

Ramjattan noted that already, authorities have cited the need to regionalize the police force among the 10 administrative regions and boost intelligence gathering to drastically reduce Guyana’s susceptibility to terrorist, thieves and pirates.