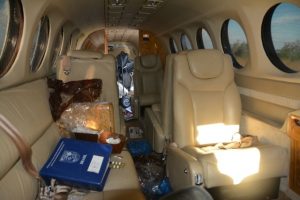 The interior of the Beechcraft Kingair that landed without authorisation on an illegal airstrip at North Rupununi.

The Brazilian company listed as the operator of the illegal aircraft found earlier this week on an illegal airstrip in the North Rupununi on Wednesday said it sold the plane to another company almost four months ago for less than US$1 million.

Speaking through an interpreter, Carlos Eustaquio of Riwa South America said the Beechcraft Kingair, bearing registration markings PR-IMG, is still listed by Brazil’s Civil Aviation Authority as being operated by Riwa because the administrative process has not yet been completed.

A spokeswoman for Banco Bradesco told Demerara Waves Online News that the plane is registered to the bank as the owner which has the right to take control of the aircraft if the debt is not paid.

The Director-General  of the Guyana Civil Aviation Authority (GCAA), Retired Colonel Egbert Field on Wednesday said so far no one has come forward to claim the aircraft which landed at recently levelled 4,500-foot long airstrip in the North Rupununi.

Police have not found any trace of narcotics or any other illegal item aboard the posh twin-engine plane. However, an identification card, cellular phones, communication equipment and other items were found aboard by police and soldiers.