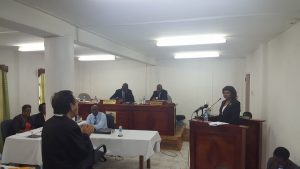 Police Legal Adviser, Retired Justice of Appeal Claudette Singh said the uncertainty about the date of the occurrence of the alleged plot to assassinate President David Granger, only the presence of the accused and the accuser, and the fact that the report was made 21 months ago posed challenges to arriving at conclusive advice.

Singh, who was grilled by Attorneys-at-Law, Glen Hanoman and James Bond at the Commission of Inquiry into the effectiveness of the Guyana Police Force in probing the plot that allegedly occurred some time in June 2015, said based on the evidence provided to her by police investigators she could not recommend that anyone be charged.

She has said the evidence provided  was very weak.

She said “on the basis of my advice, ” “yes” the police tried their best to follow her advice.

With regards to the absence of a specific date when the alleged plot was hatched, Justice Singh agreed with Hanoman that a specific date would have likely aided investigators in finding someone else who would have confirmed that Gulliard and Khan had such a conversation.

With regards to Guillard levelling the allegation 21 months after the conversation with Khan, the Police Legal Adviser agreed that it was a very long time after- a situation that would have made it very difficult. “In some cases, had the scenario where there would have been more persons, it might have been easier but when Guillard said it was only the two them, makes it all difficult, very difficult and a long time after…,” she said. She noted that if it was a jury trial, an explanation would have to be given on why only after 21 months the report was made.

Touching on the issue of credible evidence, Justice Singh said she had some difficulties with one Leon Baldeo’s statement because from the nature of the probe it was just Guillard and Khan. She said the police had difficulties getting the various persons involved to participate in confrontations but they were trying.

She said the file on the matter was first presented to her by police on April 12, 2017  and by May 16, 2017 she said there was nothing to indicate that Guillard’s story was a complete fabrication.

Based on an activity long referred to by Hanoman, she was not aware of such a document but she acknowledged that on March 29, Assistant Superintendent Caesar visited her office and discussed the allegation and she advised that the police should consider the offence of solicitation or the incitement to commit murder.

The Police Legal Adviser said the investigation remained open, but she gave no specific instructions to the police. “They are the investigators and they could know what they have to do,” she said.