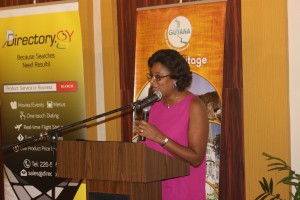 Guyana has asked the Guyana REDD‐plus Investment Fund (GRIF) for US$17 million to fund a project to increase internet connectivity in hinterland communities, Minister of Public Telecommunications, Cathy Hughes has said.

She is quoted by government’s Department of Public Information (DPI) as saying that the project-ICT Access and eServices for Hinterland, Poor and Remote Communities- is expected to bridge the Information Communications Technology (ICT) gap between the hinterland and the coast.

Hughes said the project, which would be funded under the Guyana-Norway Agreement for a US$250 million compensation package for preserving standing forests to absorb carbon emissions that cause climate change, would ensure equitable access to ICT services.

The project proposal requesting  US$17 million, is a five- year intervention programme and was formally submitted to the GRIF Secretariat. It is expected to bolster the existing connectivity drive, the DPI said.

The Public Telecommunications Minister expressed excitement because the project has a number of components.  She noted that there are many “far flung parts of the hinterland like the Rupununi in the interior where we need special approaches”. The Minister explained that there is a cost to providing internet access and projects will need to be developed that will generate income into the communities.

Another important component of the project, Hughes identified is the training of individuals. She explained that training of persons in the communities that are to be connected is imperative. “We will need to go into these communities and provide training so that they can know how to use this internet they are getting to better themselves”, Minister Hughes said.

Minister Hughes noted that the Ministry has been already able to connect communities in Masakenari, Bartica, Linden and Mabaruma.

The GRIF is a multi-contributor trust fund for the financing of activities identified under Guyana’s Low Carbon Development Strategy (LCDS). The GRIF was established in October 2010, with the World Bank as Trustee, following an agreement signed between Guyana and Norway in November 2009, in which Norway agreed to provide Guyana up to US$250 million by 2015 in performance-based payments for avoided deforestation in support of Guyana’s LCDS.

Pending the creation of an international REDD+ mechanism, the GRIF represents an effort to create an innovative climate finance mechanism which balances national sovereignty over investment priorities while ensuring that REDD+ funds adhere to the highest internationally recognized standards for financial, environmental and social safeguards.