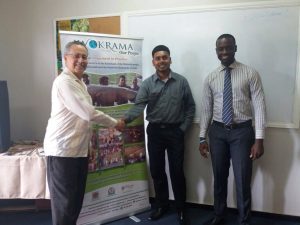 ACP Secretary-General, Patrick I. Gomes meets with two of the three scholarship recipients.

Three staff members of the Iwokrama International Centre for Rain Forest Conservation and Development have been awarded scholarships to study in Fiji, the centre announced Thursday to coincide with an informal visit by Secretary General of the African Caribbean Pacific Group of States (ACP), Dr. Patrick Gomes.

“Dr Gomes toured Iwokrama’s offices where he met and interacted with two of the three staffers of Iwokrama who were just offered scholarships under the ECCAM (Education for Climate Change Adaptation and Mitigation) project to pursue their masters degrees. The three staff are  Shara Seelall, Jason Dick-Grant and Purnanand Lalbachan,” Iwokrama Centre said in statement. All three awardees will attend the Fiji National University.

Demerara Waves was told that Dick-Grant  will be reading for an Executive Master of Business Administration (EMBA), Lalbachan for a Master of Commerce and Taxation and Seelall for a Master of Tourism

ECCAM is funded by the ACP and European Union from the European Development Fund. The project offers opportunities for study in several partnering ACP countries’ universities. Partner universities include University of Guyana, Fiji National University, University of the West Indies. Iwokrama is an associate partner. 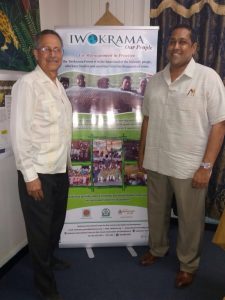 During Dr. Gomes’ informal courtesy call to Iwokrama’s offices at 77 High Street, Kingston Georgetown, he indicated that the ACP deeply appreciates the commitment of the Iwokrama International Centre for its novel work in conservation and sustainable development and acknowledged the role Iwokrama provides in transfer of knowledge including scientific knowledge to other ACP countries.

The Centre described Dr Gomes as an ardent supporter of Iwokrama and whilst he was Guyana’s Ambassador to the European Union and the ACP, was instrumental in the Centre securing a substantive European Grant for a research project that was implemented in three regions of the ACP where Iwokrama was the designated focal point for the Caribbean Region, and successive initiatives

The Secretary General had an enlightening discussion with the awardees on the history of the ACP, established by the Georgetown Agreement in 1975.  He also spoke about the historical contributions and influence of Guyana, Fiji  and other ACP counties to several international issues including treaties on environment and trade.

The Iwokrama International Centre (IIC) was established in 1996 under a joint mandate from the Government of Guyana and the Commonwealth Secretariat to manage the Iwokrama forest, a unique reserve of 371,000 hectares of rainforest “in a manner that will lead to lasting ecological, economic and social benefits to the people of Guyana and to the world in general”.

The Centre, guided by an international Board of Trustees is unique, providing a dedicated well managed and researched forest environment. The forest is zoned into a Sustainable Utilization Area (SUA) and a Wilderness Preserve (WP) in which to test the concept of a truly sustainable forest where conservation,

environmental balance and economic use can be mutually reinforcing. The IIC collaborates with the Government of Guyana, the Commonwealth and other international partners and donors to develop new approaches and forest management models to enable countries with rainforests to market their ecosystem services whilst carefully managing their resources through innovative and creative conservation practices.

Iwokrama brings together 20 local communities (approximately 7,000 people) who are shareholders and participants in the IIC’s sustainable timber, tourism, research operations and forest management activities through complex co-management and benefit sharing arrangements;  scientists and researchers engaged in ground breaking research into the impacts of climate change on the forest and measuring the scope and value of its ecosystem services; and a portfolio of sustainably managed and certified business models using innovative governance systems which include participation of the private and public sectors and the local communities, earning income from the forest and its natural assets whilst employing international social, environmental and economic best practice, whilst still keeping abreast of the ever changing thinking on funding for environmental projects in the face of climate change and the perennial scarcity of international finance.

This alliance and the Centre’s work programmes are committed to showing how a rain forest can be used for real sustainability, real climate change protection and real community benefit.