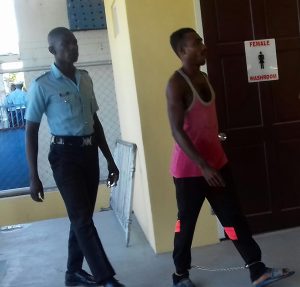 Twenty-six year old Dwayne Tappin was Wednesday morning remanded for the alleged murder of his uncle.

Tappin who appeared before Magistrate Alisha George in the Sparendaam Magistrate was not required to plea to the indictable charge when it was read out to him.

The former  Guyana Defence Force soldier had his bail refused and was remanded until September 28.

Reports indicate that at around 12:30 neighbours were reportedly awakened by a loud commotion coming from the property and the Police were called to investigate.

However, the gruesome discovery was made by the lawmen who reported that the dead man’s body and head were discovered in different parts of the bloodied house.