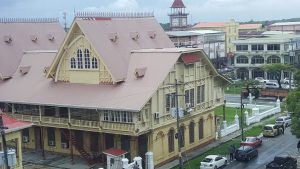 The High Court has ruled that President David Granger’s revocation of State leases aback Number 40 Village, West Coast Berbice was unconstitutional because they amounted to the unconstitutional deprivation of private property and the leases were valid although they were not signed by then President, Donald Ramotar.

Chief Justice, Roxane George ruled on Tuesday that the cancellation of the farmers’ lease amounted to the compulsorily acquisition of their leasehold interest thereof without the prompt payment of any or adequate compensation as is guaranteed by Article 142 of the Constitution of Guyana and the cancellation of the Applicants lease was unlawful, null, void and of no effect.

“In the course, of her ruling the Chief Justice rejected the arguments advanced by the Attorney-General, that the President and his actions are immune from legal challenge and that the Applicants leases were invalid because they were not signed by President Donald Ramotar. The Court held that the Applicants’ leases were properly executed and were valid and binding,” the lessees’ Attorney-at-Law, Anil Nandlall said in a statement.

Chief Justice George also ruled that “unless compensation is paid which is to be determined by the parties,” a conservatory order has been granted prohibiting the servants and/or agents of Mahaica Mahaicony /Agricultural Development Authority or any other Officer of the State from entering upon, remaining, occupying or in any manner whatsoever interfering with the Applicant’s quiet and peaceful possession, occupation and enjoyment of the said lease

Additionally, the Court ordered costs to the Applicants amounting to GYD$300,000.

On Friday, the 18th day of March, 2016, the Applicants said they observed a notice in the Kaieteur News, published by the MMA/ADA under the captioned “Cancellation of State Land Leases Seafield and No. 40 Villages, West Coast Berbice”; the notice read: “Notice is hereby given that His Excellency, the President of the Cooperative Republic of Guyana has cancelled all State land leases as described in the Schedules hereunder”. On the 21st day of March, 2016, the Applicants received letters from the MMA/ADA informing them that President David Granger cancelled their leases and that they must cease occupation and give up possession of the land to the MMA/ADA.

Nandlall said at no time were the Applicants afforded a hearing by any person or body or authority offering them an opportunity to show cause why their Leases should be cancelled, nor were they made aware of the reasons why their leases were cancelled.

They were represented by Attorneys-at-Law, Nandlall, Mr. Manoj Narayan, Ms. Sasha Mahadeo-Narayan & Mr. Rajendra R. Jaigobin in the constitutional proceedings against the Attorney General and MMA/ADA in seeking several reliefs

In her ruling, Chief Justice Roxane George S.C., held that the Applicants leases constituted property under Article 142 of the Constitution and that the President’s revocation of those leases amounted to a deprivation to the Applicants property without prompt and adequate compensation as prescribed by Article 142 of the Constitution. The revocation of those leases, therefore, were unconstitutional and null and void.

Attorney-at-Law Nandlall said decisions by then Chief Justice, Yonnete Cummings-Edwards in cases brought by several rice farmers from Seafield, West Coast Berbice “are yet to be delivered.”