Baroness Amos calls for end to ‘racialised politics’ in Guyana 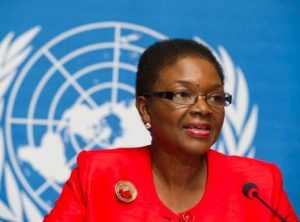 She was the first Black British Cabinet minister in Britain so knows  bit about race and politics.She is not one for basing political parties on race as in Guyana she told a packed meeting at the Guyana High Commission in London on Tuesday night.

This,the latest in the ‘Guyanese Newsmaker’ series produced by this writer.

Lady Amos went on from bring the Secretary of State for International Development in Tony Blair’s Labour government to be British High Commissioner in Australia Under Secretary for Humanitarian Relief  at the United Nations-a job which  affected her greatly to today being he Principal of the School of Oriental and African Studies,London University. She is one of the founding members of the ’Guyanese Mafia’ in Britain is proud of her Guyanese heritage.Born in Wakenhaam,Essequibo both parents teachers  who brought their children-Valerie was then nine-to the UK for a better life and settled in South London.Her father was a hard taskmaster-once when she brought home 96% in history,he asked what had happened to the other 4%!! She remembers Guyana fondly, returns regularly and her next visit will be this August.

England though became her adopted home. She settled perfectly emerging  up as the deputy head girl in her school where she was one of the very few black faces.

So much has she become ‘British’ after her stellar international career that she confessed to feeling ‘empty’ after the EU Referendum in june 2016 voted for Brexit’This was not my England’ in her words.It was her work for the UN in Disaster Relief  that affected her most deeply.She marvelled at how the human spirit refused to be crushed in the most dire of circumstances. When asked,she named the women of South Sudan as well as her parents Michael and Dolly as her role models. n their honour she and sister Coleen set up and administer the Amos Bursary Trust which to date has helped ninety young black men to achieve educational goals.

Amongst ‘her people’ she was relaxed and open .Attendees at the UG Diaspora conference  will be able to judge for themselves when they see the video of the event at the Ramada Providence next Tuesday.

Lady Amos was born on the Essequibo Island of Wakenaam.