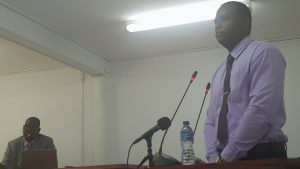 The Head of Criminal Investigations Department at the Guyana Police Force, Senior Superintendent Wendell Blanhum  on Monday said an alleged plot to kill President David Granger was impossible to believe, but not before the Crime Chief and the Commissioner of Inquiry, Retired Assistant Police Commissioner, Paul Slowe engaged in a heated verbal battle.

“I would say with the greatest amount of respect, it is my humble opinion that the allegation made by Guillard against Khan is inherently incredible,” he said in response to a question by Retired Justice, Ian Chang at a Commission of Inquiry into how the police probed Andre Guillard’s allegation that businessman, Nizam Khan had offered to give him GYD$7 million to assassinate President David Granger.

Police Legal Adviser, Retired Justice Claudette Singh has opined, based on police investigations, that the allegation is “tenuous” and there was insufficient basis to charge Khan with incitement to commit murder. Blanhum said he interpreted tenuous to mean “flimsy; it has no bearing”. While Slowe was willing to accept “flimsy” he rejected the interpretation that it has no bearing.

Responding to additional questions from Chang, the Crime Chief said he did not believe that the allegations against the suspect was strong. “Guillard not produce any corroborating evidence to support his allegation and then also (Nizam) Khan denied the allegation,” Blanhum said.

Police have, nevertheless, been advised to continue their probe.

Blanhum recalled, when the questions were put to him by Chang, that Guillard had reported to police in 2015 that Khan had stolen two radio sets and that when he approached Khan, he (Khan) threw a gun at him and threatened to kill him. The Crime Chief acknowledged that Khan said he was dissatisfied with the police at Grove Police Station and so he opted to inform Senior Superintendent Alves. However, Blanhum said the alleged plot to assassinate the President was not made to Alves in January 2016- a line of questioning and responses that were aimed at discrediting Khan’s ‘story’.

“Based on my discussion with Mr. Alves- ‘no’ and Guillard had several opportunities to report this threat in 2015 until 2017 and he never at any given moment reported that Khan offered him 7 million dollars to kill President Granger,” he said. The Crime Chief reiterated that police had no problem with having Khan report to the police station, but had experienced several difficulties in having Guillard do so.

Blanhum said since Granger assumed office in May, 2015 there was “absolutely” no threat against the Guyanese leader’s life

Earlier in his testimony, Blanhum said “significant progress” had been made in 24 hours since the report was made by Guillard on March 29, 2017.

Slowe and Blanhum disagreed strongly over whether the plot to kill the President was treasonous after the Crime Chief said the offence that police received advice from the Legal Adviser does not fall into the category of murder, treason or treason felon. “What? The plot to assassinate the President you don’t consider treasonous?” asked Slowe.

He insisted that he was obligated to rely on facts rather than on feelings or emotions.

The two again clashed over whether the Crime Chief should have offered an opinion based on the findings of the investigators in a report that was prepared for the Commissioner of Police to be sent to National Security Council that is chaired by President Granger.

Blanhum and Slowe further engaged in a heated argument over a mistake in the date in a report for the National Security Council. In the witness box,  the Crime Chief said Guillard went to the Ministry of Public Security on March 29 to make a complaint against Nizam Khan but Slowe noted that the date in the report on April 3, 2017.

After Blanhum stated that “we all make mistakes,” the Commissioner of Inquiry remarked “it shows that you were not diligent in observing the dates…” “It tells me that due attention wasn’t paid to a document that you were sending to your superior that had perhaps had to go the higher security levels in this country,” he said.

Blanhum: What relevance that has to do with the investigation?

Slowe: It has a lot?

Blanhum: With the outcome of the investigation?

Slowe: Not with the outcome of the investigation. It is telling me that the Crime Chief, the man who is responsible for all such matters did not pay due to attention to a report he was sending to the Commissioner which had to go on to the highest level of national security in this country. That is what is telling me

Slowe: It has a lot of relevance to the people you are reporting in terms of how accurate, how diligent this
investigation is going to be. I would think so.

Inspector Prem Narine and the Crime Chief, in separate testimonies from the witness box, said Commissioner of Police Seelall Persaud, who was on leave, had instructed that the accuser, Nizam Khan, and his brother, Imran Khan, be released on bail and their firearms returned.

Blanhum, under examination by Retired Justice Chang, said from time to time he and the Acting Commissioner of Police would seek the Police Commissioner’s advice and guidance as well as give instructions although he would be on leave. The Crime Chief said in his presence, Ramnarine has in the past contacted Persaud and he had also told him that he had contacted Persaud on the “way forward on certain matters”.

Inspector Narine, however, said he would consider it improper to some extent to take instructions from a Police Commissioner on leave.