Gina Miller on being Guyanese

by John Mair in London 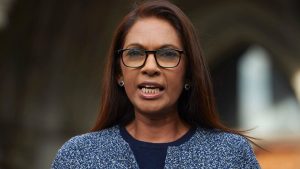 She is easily now the most recognised Guyanese in the UK.Gina Miller has shot to prominence in the last year by taking on-and winning against -the British government on the Brexit process. She objected to no Parliamentary discussion and won her case all the way to the Supreme Court.

As a result, she has been subject to threats and intimidation.Earlier this month,a British aristocrat, Viscount St Davids, was jailed for tweeting an offer of ‘£5000 for the first person to run over this bloody troublesome first generation immigrant’ And ’if this is what we should expect from immigrants send them back to their stinking jungles’.He got four months.

Next Tuesday, in an exclusive video interview, she will tell an audience at the University of Guyana diaspora conference in Providence about the life now and then.

Educated at St Gabriels Primary in Georgetown initially,she was academic but that did not protect her from ‘licks’ from her mother, Savitri,for a wide variety of transgressions. She says she developed her early sense of justice in the Singh family’s East Coast home.

She also developed her hunger for learning in Guyana though she feels that culture may not have dissipated in her homeland.

She recalls too the bitter racial divisions of the time.

Her parents packed her off to boarding school in England. The first,the elite Rodean in Sussex,was not to her taste so she withdrew to a more amenable school in Eastbourne. There, at a tender age,s he ended up in living a flat going to school, working part time and looking after her younger brother.

From there to an unhappy first marriage and  the birth of a child with learning difficulties whom she refused to give up for adoption and a career in marketing. She met and married her second husband Alan Miller,a City millionaire trader in 2005.Since she has been a campaigner for justice for savers and now for the Remainers(in the EU) in Britain. For many, she is the Queen of what they call the ‘Remoaners’.Her strength she says is her belief in herself ‘I can’t imagine it being any other way. I know my limits but I know what I can achieve’.

She is fiercely proud of ‘the Britain I live in’ and sees her fight as part of a desire to retain the multi-cultural society to which it has evolved. She describes herself as ‘Strong-I do not care what other people think about me’.

In the process of her very public battle over the las year,’every part of my life has been ransacked’. Viscount St Davids just the tip of an iceberg of trollers and haters. She never travels anywhere without security today. That’s the price of her principles and being the determined daughter of a very determined man.

The whole Gina Miller interview can be seen at the Guyana Diaspora conference at the Ramada Providence on Tuesday 24th july.