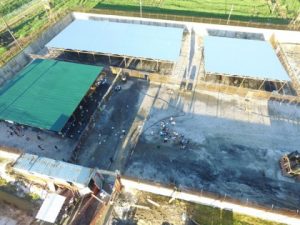 Approximately 200 prisoners, at the Lusignan facility, have been moved to the recently constructed tarmac area of the compound. Director Prisons Acting, Gladwin Samuels said that work on the temporary holding facility began the day after the Georgetown Prison fire on July 09, government announced.

The announcement was contained in a government release by the Department for Information based on its coverage of the facility that excluded other media houses.

Samuels explained, “Our intention is to sanitise those prisoners who are currently in the walled area, as described by the Minister (Public Security) who will be transferred to this area. We are looking at somewhere in the vicinity of 450.” He added that arrangements will continue to find alternative accommodations for them.

The Prisons Director explained that the new holding area comprises three sheds, made of wood and zinc, over tarmac areas that will also enable security services to have more control. Visitor and other amenities will be reinstated once all measures are put in place, Samuels pointed out, “We are aware that many family members are not only anxious to only see but to communicate with their relatives to ensure that they are well.” 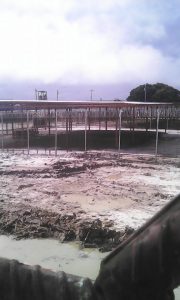 An unofficial photo of the new walled area that includes an asphalted area and roof.

The new holding area will also provide a better environment for those deemed to be more vulnerable to more hardcore prisoners, whom, the Prison Director noted, “have been taking advantage of them in more ways than one.” He further added, “I must include that there have been no reports of sexual assault. When I say taken advantage of, that might be taken wrong by the general public.”

Initially, over 1,000 prisoners were transferred to the Lusignan Prison and housed in an open air holding section. Around half of them have been moved to other prisons around the country. One Hundred and fifty-one (151) are being accommodated in the main building of the Lusignan prison.

The transfer of the inmates to the Lusignan facility followed the fire which gutted the Camp Street Prison on Sunday July 09, leaving over 1000 inmates displaced.