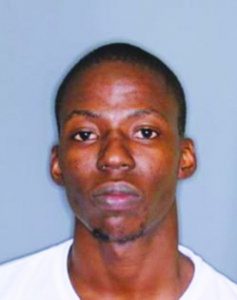 One of the five remaining prison escapees was captured Monday shortly before 4 PM at ‘B’ Field, Sophia, police confirmed.

He is Cornelius Thomas.

Police said he was unarmed and there was no need for the use of force. He was seen walking along the roadway.

Law enforcement authorities believed he moved across to Sophia after he was spotted Sunday afternoon at D’urban Backlands Area.

No firearm was found in his possession.

Police sources said he was taken to the headquarters of the Criminal Investigations Department where he would be interviewed to ascertain who might have been harbouring him since he fled from the Georgetown Prison on Sunday, July 9, 2017 shortly after fires were set several areas of that maximum security jail.

With the capture of Desmond James and now Cornelius Thomas, it means that four others are now wanted for the offences of escape from lawful custody and murder.

Prison Officer, Odinga Wickham succumbed to gunshot wounds on the same day of the prison riot while he was undergoing emergency surgery at the Georgetown Public Hospital Corporation.